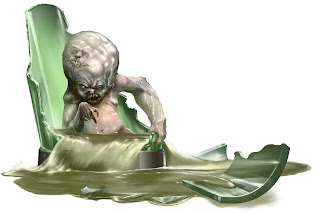 In one spread, you have everything I want in my fantasy game: the whimsy and the horror, the magic and the malevolence.  You have two monsters whose names 1) involve real words, not syllables, and 2) are instantly recognizable and evocative.  Together, they teach me something about my own world’s history/society and folklore.  Their illustrations (by Joshua Meehan and Brynn Metheney) are killer.  And best of all, they're low-level monsters—you can put either one in the first session of any Pathfinder campaign.  Like I said, everything I want in my fantasy game.

So: pickled punks.  Deformed undead fetuses in jars.  HOW COULD YOU NOT LOVE THIS?!?  As a GM I mean.  As a player, I can see how facing a diseased undead baby that automatically grapples and has reach (um…it's using its umbilical cord as a belay line, isn't it?) might be a little creepy.  Just a little.

So creepy, in fact…here are four adventure seeds!

Adventurers chase a homunculus into its master’s storage room.  Lining the shelves are racks of pickled punks.  The homunculus hides on the top shelf until the party is all the way into the room, then knocks over an entire row of jars.  While the party deals with glass shards and a half-dozen hungry undead, the homunculus makes good his escape.

Adventurers smuggle a sealed box through the lines of warring armies without ever knowing what they carry or why.  Occasionally the box makes disturbing noises as they do so.  Only when they present their parcel do they find out what was inside: a jar containing a pickled punk.  When their patron leaves to fetch their pay, the hungry fetus manages to tip over its jar and break it.  Can they recapture the punk without angering or further obligating themselves to their employer?  Or did he leave the punk precariously placed on purpose, hoping the undead fetus would feed on their blood (and save him the fee)?

The changeling Morva was fighting the call of her hag mother when she died in childbirth.  The sadness of the double death combined with her mother’s call to drag her back to unlife as a juju zombie.  To anyone else, Morva looks like a nursing mother, until the pickled punk at her breast pauses in gnawing upon her dead flesh to leap out of her arms and attack.

Perhaps the most disturbing magefair of all is the Briny Assembly, a combination convention and pet show where young necromancers and other morbid alchemists, fleshcrafters, and transmuters show off their talents and their latest experiments—with pickled punks being the pestilent belles of the ball.  Looking to spy on a rival, adventurers must pose as a necromancer and his entourage…and their disguises won’t be complete until they possess a punk of their own.

Reader moebiusloop points out that many folkloric descriptions of the peluda recall the catoblepas.  Truth!  But I’m pretty happy with the porcupine dragon we got.

And a sharp-eyed filbypott pointed out that a peluda did appear in Dragon #248 (browse it here, buy it here).  (It’s a Gregory W. Detwiler contribution too!)  Truth be told, it’s not a surprise I forgot—I was in college at the time so my attention was elsewhere (that particular month I was ten rows away from the lightning strike at the Tibetan Freedom Concert, actually), 1998 was not Dragon’s best year, and the dragon-centric anniversary issues all tend to blur together after a while.  Thanks for the catch!

Other notes: girlandgeeky is devious, ohgodhesloose speculates about the Plane of Shadow and teaches us about space whales, filbypott and others teach about Clive Barker, and wesschneider is disturbing.

Best of all, thedaigle writes:

I love when you cover monsters I designed. :)

Funny thing: I also love covering monsters you designed!  (In theory.  With the exception of the Inner Sea Bestiary monsters, I don't actually know which ones are yours…)  ;-)

No chance you do requests, do you?

I do do requests.  For instance, I did the cerberi early; it appeared at the bottom of the “Noqual Golem” entry.  But adding on an extra monster on top of my weekdaily schedule is rough, so it can take me a while to get to requests.  That doesn’t mean you shouldn’t try, though!  Feel free to email me at dailybestiary [at] gmail [dot] com (link written that way to avoid spam spiders) and I’ll do my best.

Did you ever do a post on dark folk?  Dark creepers?  I know you did one on dark callers...

I did indeed!  If you’re new to the blog and don’t see a monster you’re looking for, keep in mind that this is my second trip through the alphabet, and I originally started over on Blogger/Blogspot.  You can find my first pass at the letters A–F there, including the dark creeper, dark slayer, and dark stalker.

(I would make a bigger deal of the Blogger site (it’s got the entire run of monsters after all) but it’s nearly impossible to edit (Blogger and MS Word hate each other, and typos live forever there) and Tumblr makes it so much easier for people to share and reblog.  So while I still update the Blogger site every day, Tumblr is the one I focus on.)

Would it be hard to take things from Blogger and repost them here, or does the formatting issue worth both ways?

It’s more an issue of hours in the day and sanity.  It would mean reposting over nine months of entries—over 200 monsters in all—as well as inserting all the hyperlinks, italics, bolding, etc.

As Sweet Brown once testified, ain’t nobody got time for that.

(Keep in mind on my absolute fastest days these posts take 30-45 minutes to write.  More often they take 1.5 hours or more, once all the books are lugged out and put away, hyperlinking is done, etc.  I try to sprinkle those tasks throughout my workday as microbreaks, but sometimes I’m sitting down at 10:30 PM hoping to be done by midnight.  Add that to my radio show, personal and professional responsibilities, etc., I simply can’t take on much more and function as a human being.)

However, if you go back and read the A–F entries here on Tumblr, you’ll notice I have hyperlinks to the original A–F entries for every monster.  So the “Abaia” entry links to “Aasimar,” the “Adaro” entry links to “Aboleth” through “Adamantine Golem,” etc.  It’s not a perfect system, but it works, and the ugly-but-serviceable Blogger site is always there as a backup.

Hey, I’m late posting this week’s radio show!  Featuring a look back at the Solid Sound Festival, a pickup truck full of Wilco, and songs in honor of the Supreme Court's decision on marriage.  Stream and download it here!

(If the feed skips, Save As an mp3 and listen from your desktop. Link good till Monday, 7/6, at midnight.)