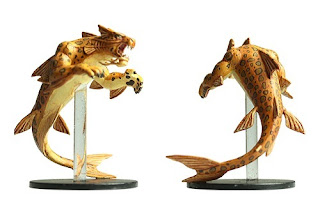 What a difference an illustration makes!  (I can't find a legit copy of the Bestiary 4 sea cat art, but this figure from Paizo’s website should give you a sense of the 2-D original.)  A lot of aquatic versions of land animals seem kind of…well, fishy (the half-horse hippocampus being the high-water mark for this problem).  So the sea cat—half cat, half fish—should seem like something ridiculous out of McElligot's Pool.  But Jim Nelson’s illustration saves it, showing a sleek, snarling predator whose feline front merges seamlessly with its almost-leopard-shark-ish lower half.  As a player, I want to fight this!  (And as someone with allergies to cats, I want to own this.)

Sea cats seem to come down on the mammalian side of the spectrum—they breathe air at least—so like seals and sea lions they will hug the coasts, and some may travel upstream in fresh water.  This also conveniently means you can deploy them even if PCs aren’t planning a seagoing excursion—just get them close enough to a beach for an encounter.

Beyond that, I don't have much to add.  You’ve got the entire world of big and little cats and pretty much all of the fish paraphylum to work with.  Mix and match and then dump your group’s PCs overboard to meet them.

Sea cats chase salmon returning home to spawn up the Tengu Falls—and they're not picky about snatching up any lone fishermen, crowfolk, or even young bears they can catch along the way.  Adventures who go to the river to refill their canteens or wash their dishes should beware.  Crossing a bridge during this season is nearly suicidal, as these cats will leap out of the water and attempt to rend or bull-rush their prey.

Evil creatures who try to sneak into Tai-Lyan temples should be wary—the bridges and gates are guarded by foo dogs, while the reflecting pools and gurgling brooks are guarded by ravenous sea cats whose long, whisker-like barbels resemble the beards of imperial dragons.  Good creatures should not get cocky, as the sea cats are much less picky than foo dogs about attacking even the most benevolent trespassers.

Land races and sahuagin rarely interact peacefully, but the trading post of Stinger Bay manages to be a waypoint where humans, halflings, strix, sahuagin, and even stranger folk can mingle.  The pirate community’s success is its unabashed embrace of blood sports, which allow the races to blow off steam and settle scores.  More than one adventure has found herself settling a dispute “the Stinger Bay way”—where she is dumped into an enclosed tank with the disputant sahuagin and a pair of fighting sea cat males.  The amethyst-colored sea cats will savage interlopers as fiercely as they maul themselves, ensuring that justice is swift, if not always fair.

I don't know what you're talking about.  I know Theoretical Physicist Brian.  I’m sure this “Ninja Brian” would have killed me—I was pretty annoying freshman year.

Also, flamingwendigo—who is either a terrifying supervillain or a guy I bet is a blast during Pride weekend—delivered some hashtags I really appreciate.  (Shades of these ones.)

BTW, titleknown, I wouldn’t use so many capital letters. You're just leaving Ninja Brian more pointy serifs with which to stab you.  #protip

Looking for the scarlet spider?  It’s back here.