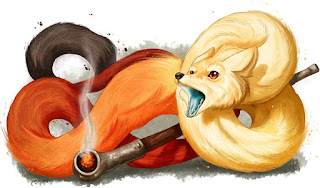 (Image by Brynn Metheney comes from the Paizo blog and is © Paizo Publishing.)

I raved a little bit about the pipefox yesterday…but man I love this monster.  Inspired by the Japanese kuda-kitsune or kanko, the pipefox is a magical beast that loves knowledge of all kinds.  Usually it pursues this knowledge in stealth, but a PC with the right personality might be able to coax one out of hiding…and perhaps even bind it as a familiar.  Such a PC should expect a thorough grilling via days of conversation and detect thoughts first.

I don't really care about any of that, though.  It’s a fox-snake that hides in your pipe rack!  Squeeeee!  I’m not fussed about what its CR or XP is; I’m just glad it exists in the game.

Every time a halfling goes to use her pipe, she finds it moved to a different place—more often than not, on a path leading to nearby woods.  A pipefox has discovered a cache of books, but it lacks the hands to unlock the hasps.  It carefully judges the halfling’s reactions to see if she might make a good partner…or if she can at least be suckered into opening the books.

Trapped in the shape of a boggard, Grandfather Toad is an expert on divination and abjuration (though ironically, neither his foresight nor his defenses were enough to prevent his condition).  His pipefox familiar has become unhappy now that her once daring and widely traveled master has become more and more settled, and she seeks a way to break or transfer her binding to another…and is not averse to provoking a conflict with adventurers to do so.

Though wicked, yamabushi tengus (see Pathfinder Adventure Path #49: The Brinewall Legacy) are cunning, and according to folklore were the first to befriend pipefoxes.  To this day, the two species are often inseparable, the oni’s habits of thieving, spying, and trickery doing much to keep the inquisitive pipefoxes fulfilled.  Adventurers who patronize fortunetellers for their pipefoxes’ auguries and divinations should beware: the fortuneteller is likely a yamabushi tengu, and any information his pipefox gleans from the above abilities or detect thoughts will be promptly sold to the adventurers’ enemies.