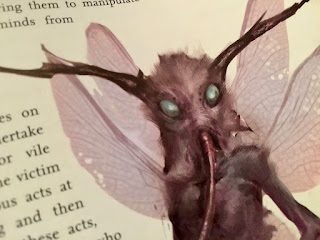 (Illustration by Jorges Fares comes from GeekDad and is © Paizo Publishing.)

What, a moth psychopomp wasn’t mothy enough for you?  Then how about a moth demon, the oolioddroo?

From browsing Tumblr, I know a lot of Daily Bestiary fans are also fans of possession and body horror—so merry belated Christmas, kids, because this monster is for you.

The oolioddroo’s party piece is using her thought-siphoning tongue—you know, the one that can slurp up memories, skills, spells, or Wisdom—to implant her eggs into the brain of a sleeping or helpless victim.  Eggs that then hatch as larva (still in that brain).  Which the moth demon can track across any distance in the same Plane (safely nestled in that brain).  And through which the demon can detect thoughts, modify memory, and cast suggestion (because brain). Worst of all, the oolioddroo can sacrifice the larva (and the victim’s brain—have I mentioned the brain?) in a kind of feeblemind bomb—a tactic that causes even the Bestiary 6 to break tone and refer to it as a “scorched earth” tactic.

That’s right: This is a monster so awful it makes even the rulebook itself stop and say, “Daaaaamn.”

An oolioddroo poses as a roving fortuneteller.  Her magical abilities give her plenty of fodder for predictions, and she leaves a trail of infected or feebleminded victims in her wake.  Normally such a humble disguise would be beneath the moth demon, but this particular band of rovers has long been welcome at a local magefair the oolioddroo intends to infiltrate.

Adventurers are asked to check on the niece of a patron.  The young woman was married off to a stern landholder in a distant county, and in the intervening months her letters have grown strange and evasive.  Should the adventurers take the case, they find the woman in decent spirits but acting oddly—as do many inhabitants of the local village and the surrounding district.  Further investigation reveals the truth: Much of the town is under the control of an oolioddroo.  But when the adventurers go to confront the demon, they find themselves ambushed by the village’s uninfected in habitants.  The entire town has willingly devoted itself to the moth demon, and the infected villagers were merely a lure to draw the adventurers into its clutches.

Among a certain truly decadent and thrill-seeking set, oolioddroo eggs are a delicacy akin to caviar.  The challenge is to consume and pass the eggs without falling under the moth demon’s sway.  And since such eggs can only be harvested from the brains of an oolioddroo’s victims, this delicacy necessarily involves appallingly risky chirurgery or a hefty body count.

That second adventure seed has a very Hellboy feel to it, if you ask me. 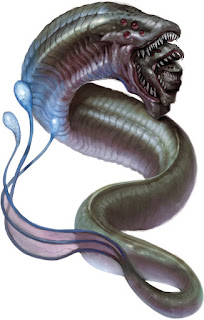 (Illustration by Yigit Koroglu comes from the PaizoBlog and is © Paizo Publishing.)

The last year or so has been pretty good to aboleths—their schemes are the focus of the Ruins of Azlant Adventure Path, they got a full-fledged ecology in the same, and psychic monsters and psychic magic in general have been on the upswing since the release of Occult Adventures and the Occult Bestiary.

One of OB’s contributions was the omnipath, the information-sharing/communications network (with a dash of spying and possession) of the aboleth race.  It was also one of our first indications that the race (known as othagu or alghollthus, depending on what source you’re reading) included more phenotypes than the tentacled fish form of the aboleths and the veiled masters.  Omnipaths resemble eels, but with a horrific set of multiple jaws nested inside each other, like something from the Alien franchise.  They have equally horrifying powers: an eidetic memory, the magic of a 15th-level psychic, a touch that can turn skin transparent and vulnerable, psychic tail rays (because why not), and a telepathic mesh that allows an omnipath to share sensations and possess victims with alarming facility.  They are, in short, bad news.

If you’re an aboleth fan, omnipaths make an excellent high-level contribution to the family tree.  If you’re not, they could still be useful in your campaign, either as one-off aquatic/subterranean monsters or as part of some other cabal.  Iku-tursos and siyokoys are both good options to pair omnipaths with in Pathfinder.  And in D&D (particularly 2e AD&D Spelljammer) the neogi race may have bred omnipaths to combat the threat of illithids, or developed them in some sick collaboration with the mind flayers.

The mysterious and seemingly utopian kingdom of Ildevania is protected by the Queen’s Mantle—a phrase meant as a metonym for her power and authority, but that also nods to the very real mesh of telepathic energy she shares with her trusted agents, the Footmen.  Adventurers discover that many of the Footmen are actually omnipaths and their thralls.  Is the country’s utopian peace worth the dark bargain the queen has made?

Adventurers manage to subdue the saboteur Renoir and shut the Cypher Gate, sealing in the dread energies he meant to unleash.  His capture also reveals the very real threat of the aboleth nation lurking far below the canals of Vinchenza, City of Spices and Spies.  Incensed that Renoir shattered the Calling Crystal that allowed Vinchenza’s fleet captains to speak over long distances, the Doge’s Council wants adventurers who can do the same to the aboleths—by gutting their omnipath network like so many eels.

A spiritualist unlocks a dark secret from an adventurer’s past: She was an omnipath in her past life.  Moreover, that omnipath’s mother is still alive…and seeks to make contact with her lost daughter, in whatever reincarnated form she now takes.  The adventurer must wrestle with what to do with this information, investigate what new insights or powers her heritage might unlock…and face the possibility that this is all a complicated aboleth plot.

I linked to the more recent (Bestiary 6) stats for the omnipath above.
Posted by Patch at 8:20 PM No comments: