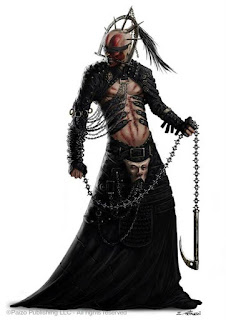 Picture the gimp from Pulp Fiction.  Pierce him a bunch more.  Actually, no—cut him into pieces and reassemble him with bits from a dozen other failed experiments, like Joker’s ruined girlfriend in the 1989 Batman.  Drive him insane over decades or centuries.  And then make sure that when he unzips his gimp mask a literal otherworldly scream emerges.  Fun, right?

Sacristans are slaves and eager submissives for the worst masters in the universe—but to your PCs they will be the brutes and heavies standing between them and the real villains.  While intelligent from a stat block perspective, they have no free will, so if sacristans find themselves without masters they will likely try to attach themselves to the cruelest sadist they can find…or worse, reënact the tortures that were inflicted on them upon new victims in dull, meaningless, and excruciating rites.

Speaking of which, I’ll take it as a given that you know how to use sacristans in a kyton-focused encounter, and instead give you some odder scenarios:

The duke of Thronehold bargained for aid from a kyton evangelist. For once the kyton didn’t come out on top of the deal.  He gifted the duke a pair of sacristan bodyguards, expecting their shadow screams would swiftly convert him—but the duke’s iron will and utter deafness (he used lip-reading to treat with the evangelist) have so far left him immune.  One sacristan now works in the duke’s dungeons, the other remains with the duke at all times to protect him from harm and stand as a symbol of his cunning.

Formerly a remote resort spa sacred to the goddess of pleasure, the Delectatium collapsed when its clerics listened too long to the honeyed words of an ostiarius.  It took a knight sworn to the pleasure in chastity to slay the kyton, and she died in the act.  Masterless and unable to return to the Plane of Shadow, the ostiarius’s kyton bodyguards are forlorn and insane with lack of purpose.  Visitors to the now-dilapidated spa are captured and forced to act as priests and unholy torturers in rites they don’t understand.  Most of these victims soon kill themselves in revulsion or succumb to the sacristans’ shadow screams.  Adventurers who manage to slay the kytons will also have to deal with a moral quandary: what to do with an innocent but still kyton-blooded shackleborn tiefling (see Blood of Fiends) born from one of these ghastly rituals.

Adventures discover an upasunda creating an abholy war blimp out of an entity that can be best (but barely) understood as the miscarried fetus of a god.  After defeating the asura, they must somehow return to their home plane.  A glowing duct deep in the corpse contains a portal, but the way is a tumorous tunnel through the Plane of Shadow, guarded at both ends by sacristans that greet visitors by tearing out their stitches and howling in outrage.

Once again, I try to avoid lazy “kytons are evil because they’re sadists” logic.  Sure, sadism and evil often go hand in hand, no question.  (And before any S&M fans rise to protest, hang tight for a second—we’ve already covered both positive and negative portrayals of BDSM in a pretty involved post.  Check out that and then swing back here.  This is a blog that makes RACK jokes, after all.)  But where kytons are really evil is in their selfishness, ruthlessness, and the disconnect between what they sell and what they actually deliver.  Kytons are always operating at an informational advantage over those they bargain with and/or seduce—an advantage made wider by the drugs, intoxicants, addictive pleasures, and unwinnable games of chance they employ, plus their own maddening presences—all of which make a mockery of any notion of true, informed consent.  That’s the truly evil part—the chains and scourges are just a symptom.

Speaking of fan comments, I failed to point out yesterday that the rukh was inspired by The Seventh Voyage of Sinbad, and holy Shelyn did I hear about it from readers.  It’s all good, guys—sure that one went right past me, but I can’t catch ’em all…plus I haven't seen TSVoS since elementary school (and I’m not even sure if I’ve ever seen it all the way through, or just pieces).  Seriously, I’ve seen Ivanhoe (which came out the same year, incidentally) more recently.

The worst part is TSVoS was actually playing in my neighborhood a few weekends ago, and I was going to go until I realized it was the weekend I was up in MA seeing Wilco.  Sigh.  (Still worth it though.)

Any chance I could request the Trox from Pathfinder? I think they're in the Monster Codex, if you're interested.

I think they're in the Advanced Race Guide.   I can’t promise I’ll get to them early—there are a few requests ahead of you, plus the backlog of about a dozen unfinished posts I need to fill in—but they are on the schedule for September anyway, so we will definitely get to them soon!

Speaking of schedules, holy crap I need to mail Benjamin’s book.  Life post-Alaska has been a thing—not in a bad way, but still a thing.

Here’s last night's radio show, packed up for you to download!  New post-punk.  New-to-me Blockhead.  Classic Parliament.  Songs based on the poems of Henry David Thoreau.  Zero Taylor Swift mashups.  One of those sentence fragments is a lie.  Stream or download it here.

(Link good till Monday, 7/20, at midnight.  If the feed skips, Save As an mp3 and listen from your desktop.)