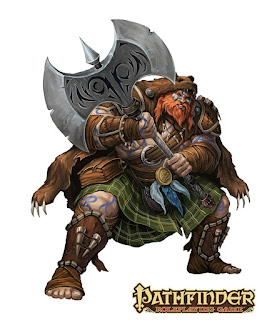 (Illustration by Rogier van de Beek comes from the artist’s DeviantArt page and is © Paizo Publishing.)

In myth, the Fir Bolg are an early Irish race (descended from an even earlier Irish race that wandered off toward Greece and back…or maybe “Fir Bolg” is just another name for Gaul’s Belgae people), who were in turn conquered and displaced by the Tuatha Dé Danann, who would become the gods of Ireland.  That sounds complicated, but only because it’s totally complicated.  But it gets easier, because in fantasy role-playing firbolgs have been transformed into goodly giantfolk, often contrasted with the imposing fomorians.  (…Which is ironic, because in the myths the Fir Bolg never encountered the Fomors and suddenly now you see why they teach Greek myths in school and never touch the Irish stuff Jesus I am so lost right now.)

Pathfinder’s firbolgs are small for giants—only eight feet tall—though what they lack in stature they make up for in Huge-sized weapons.  But honestly most of the time they’ll probably avoid drawing steel, as in general firbolgs act more like fey, keeping to themselves and employing reduce person and alter self in order to pass unnoticed among humans.

As such, the firbolg is awesome when you need an NPC with something secret about him, a mysterious village that is More Than It Seems, or a giant that won’t immediately try to bowl the PCs’ heads off.  And if you want to evoke the Fir Bolg of myth, firbolgs make excellent remnants of a previous age, possessing knowledge or natural wisdom humans have forgotten.  Taller, stronger, magically talented, and simultaneously skilled at war and peace, firbolgs represent a raw, bygone golden age that makes the present one look shabby in comparison.

The duke has announced a bounty on ogres, so adventurers of all stripes gather in the taproom of the Boar & Basilisk to hear the details.  A stranger catches everyone’s eye—a man with a ginger beard standing a full eight feet high.  The stranger is a firbolg who has had a geas laid upon him: He must fight every ogre or troll he encounters or he will grow sick and weary.  He has been traveling with evil adventurers and would like to leave their company, but the blackguards are skilled with poisoned blades and threaten anyone who engages him too long in conversation.

A fighter is attempting to reconstruct the lost fighting style required to employ the gáe bolga (a kind of barbed chain spear launched with a kick, excellent for disemboweling foes).  He discovers hints that the lore survives in an isolated farming village.  The villagers are actually firbolgs who gently try to discourage the fighter from pursuing this bloody art.  One tipoff to their true identities might be the absurdly large bastard sword hidden under the floorboards of the guestroom the fighter and his friends are given to sleep in.

Adventurers crossing a bridge meet a proud warrior crossing the other way.  Rather than give way—whether out of a desire for a bit of sport, or in righteous anger, depending on how polite the adventurers were—the warrior challenges their best warrior to a duel with quarterstaves.  As the duel begins, the stranger casts reduce person on the warrior, while he himself grows to eight feet in height and swaps his staff for a tree trunk.

Does anyone remember the d20 game inspired by Irish myths?  Came out early 2000s?  When Wizards of the Coast was shutting down its retail stores I bought one of those books at a fire-sale price, but it’s in some box now.  I vaguely remember flying longboats were a thing in the setting, but that’s about it.