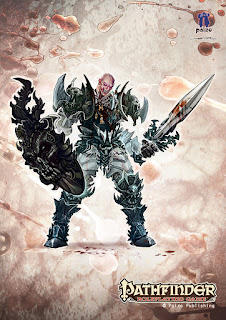 (Illustration by Ertaç Altınöz comes from the artist’s DeviantArt page and is © Paizo Publishing.)

At first I wasn’t going to do this monster, assuming it was a setting-neutral reskin of the Inner Sea Bestiary’s Spellscar fext.  But a closer look at the stats reveals the adjective-less fext is a horror all its own.

The notion of the unkillable officer or warlord is a pretty common one in fantasy—especially in novels, where a villain’s reputation can grow over the course of a whole book or even a series.*  So the fext nicely fills that thematic slot.  It’s also nice to have a lich-like undead option for martial types that’s not your standard graveknight.  (That’s a death knight to you 3.5 fans).

The fext is also one of those cases where it’s worth going back to the original Pathfinder Adventure Path entry (#71: Rasputin Must Die!).  It lays out a wicked ecology (necrology?) for how fexts are created, where children are corrupted in the womb and then raised to be great soldiers, ignorant (or not, depending on the process and local custom) of the premature undeath that awaits them.  Eventually, they surrender to fever, lying comatose until they rise as undead horrors, ready to resume their true destinies.  For some this transformation is a revelation, for others a shock that gives way to resignation…but for many of these grim butchers, their lives were already so blood-soaked that the metamorphosis is merely an interruption in a long parade of death.

Which raises the question, where do these creatures come from?  What sick individual or society would create them, given the time it takes to bring a single fext into being? The answers are many, but all of a piece: constantly war-torn countries, military dictatorships, occupied territories, sites of ethnic cleansing, families where honor and revenge trump morals and ethics, and so on.  Where are fexts created?  Wherever hate lasts for generations.

Tales of redoubtable, merry freedom fighters are usually exaggerations.  Most rebels nurse far darker thoughts of revenge, score-settling, and bloody redemption.  As adventurers with the Lady Light Crusade fight street-to-street in the spell-blasted district of Barshaw, trying to herd frightened citizens to Highgarten before rising floodwaters trap them, they find their way blocked by a platoon wearing uniforms from the last war, led by a grinning fext.

A surprising number of fexts were elves in life.  Already given to racial and class-related schisms, and with centuries to nurse their grudges, disgruntled elven houses will go to dire lengths to restore their honor and settle old scores.  Fexts also explain the reputations of certain dark elf generals as unkillable nightmares.  Drow matrons are quite happy to contribute a male child to their houses’ military aims, but more than one of these future fexts has grown to overthrow his mother after his apotheosis.

Rebel adventurers live double lives in a twin cities.  One is a desert city-state ruled by cruel philosopher-kings, the other a conifer-filled alpine temple complex where druids and skinwalkers walk with—and as—animals, espousing survival of the fittest.  The adventurers dance between the two via gates made of shadow, trying to improve the lives of commoners in both locations while uncovering what mystery binds these cities together.  One clue might be the cities’ respective rulers, who laugh at the bite of steel or claw.

*Novels also leave a lot of time for the characters to fret over said unkillability, which is key to building the tension.  I mentioned before that I’m listening to An Ember in the Ashes on audiobook, and 3/4s of the way in the Commandant is still positively terrifying.

(On the other hand, fantasy films have to be more economical with their time.  That means they usually put the murderous McGuffin in the path of the protagonists early on, making the central tension not if the warlord can be killed but if in time.)

Tuesday night, in addition to the usual indie rock and pop, we took a deep dive into Paul Simon’s latest album, Stranger to Stranger, which is chock-full of microtonal thinking and world music influences.  I had a lot of fun with this one and I hope you do to.  Stream or download it here until Monday, August 22, at midnight.