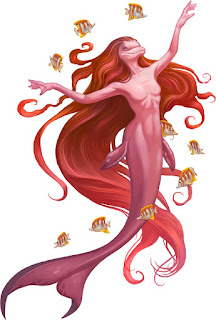 (Illustration by Jim Nelson comes from the Paizo Blog and is © Paizo Publishing.)

So like us—warm-blooded, clearly intelligent, full of personality—and yet living in a world so different from our own, it’s no wonder aquatic mammals inspire tales of charming shapechangers.  In Ireland, seals transform into selkies; in the Amazon, river dolphins inspire tales of encantados.

Encantados are especially interesting because they aren't shy or elusive fey—they like a fiesta.  These means that PCs are as likely to encounter them in the middle of an urban, conversation-based role-playing session as they are on a wilderness wandering monster table.  Since their imperfect shapechanging always gives them something to hide, players might either find them coy—perfect for a romance subplot—or suspicious—making for a great red herring in a murder-mystery scenario.

And when in doubt, obsessive kidnappers and violent narcissists always make great villains.  Imagine the look on your players’ faces the next time they get critted by a spear-wielding dolphin-girl bard during a thunderstorm she summoned…

An encantado enchantress fuels her narcissism by always having several human thralls on hand.  Many of these she sends back to their home villages bearing her squalling young.  (She has no patience for children.)  If these children grow up to exhibit half-fey or undine traits, the encantado reappears on their fifteenth birthday to claim them as her “heirs” (more accurately, her slaves).  Those who acquiesce become her agents on land.  Those who resist she baleful polymorphs into dolphins, using a wand she stole from a hag decades ago.

During a masked ball, a dashing young woman dares an adventurer to best her in swashbuckling.  During the duel, he accidentally knocks off her hat and wig, revealing a gaping blowhole.  Aghast, the young woman then tries to kill the adventurer to protect her secret.

Along the Uke River, brides fleeing abusive husbands will sometimes hurl themselves into the falls, hoping to be transformed into encantados.  After a baron loses his daughter to the falls, he hires adventures to bring her back, whether she is a fey or a corpse.  (The marriage contract included a heavy penalty should the bride renege that he has no intention of paying, abuse or no—even a raise dead spell would be cheaper.)  Along the way, the adventurers will have to brave the falls, kappa pranksters, bloodthirsty merrow, and the liberated encantados themselves.  Worse yet, not every bride who throws herself into the falls is transformed…and many of the luckless suicides return as undead.

I pretty much picture every encantado trying to hide her blowhole as Amy Winehouse.

I like the encantado now, but it took me a while to get over the angry twitch I get whenever I see whale-fey.  There’s a reason for this: As I’ve mentioned before, 3.0’s Monster Manual absolutely gutted the fey roster.  (And, if I recall correctly, its authors went on to diss and dismiss the excised faeries in the pages of Dragon, rubbing salt in the wound.)  And when Monster Manual II came out, what kind of fey did we get?  (Drum roll, please!)

I may or may not have screamed and thrown the book across the room.  You decide.