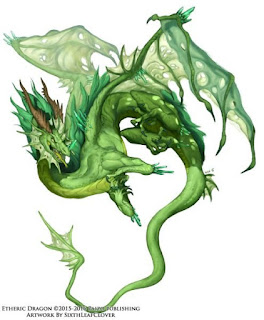 When push comes to shove, stat blocks beat fluff in most monster books.  That’s especially true when it comes to dragons—three complete stat blocks on two pages don’t leave much room for description.  And so it is that 17 words in Bestiary 5 sum up all we know of etheric dragons in terms of personality, hunting style, culture, and outlook.

The good news is, that gives you plenty of space to play.  So, what do you want your etheric dragons to be like?

It’s a given that etheric dragons are at home in the gloom and mist.  They dwell on the Ethereal Plane and seem to almost have one foot in the grave (or at least the spirit world)—in fact, by the time they are adults, the mere act of traveling renders them incorporeal.  Their breath can leave a luckless victim only a few heartbeats away from becoming a corpse, and their claw/bite attacks are as deadly to spirits as they are to physical beings.

Beyond that, it’s up to you.  Has being surrounded by spirits left them cold, cynical pragmatists untroubled by mortality?  Do they take their survivalist instincts to extremes, hiding in multiple, trap-strewn lairs throughout the Ethereal?  Are they like intelligent jungle cats, slipping silently through the mists to strike and then fade away?  Has being neighbors with dangerous creatures like xills and night hags left them leery of other species?  Or, inspired by them, do etheric dragons treat mortals simply as otherworldly cattle to be subtly herded until their bodies or souls can be put to the dragon’s use?  Do they collect secrets of the living and the dead, acting as brokers for their nightmare and occult dragon kin?  Or do they resent these soul and scroll collectors, and guard their realms jealously?  It’s all up to you…

Unbeknownst to him, a recent encounter with a manasaputra has caused an adventurer’s chakras to shine like a beacon.  The glow of the pooled ki energy glitters so brightly to those who can see it that it lures an etheric dragon out of his den to investigate.

The ranger school at Landolin is more demanding than most.  Youths who join the school hone their woodcraft to a keen edge, with special attention paid to the art of camouflage.  The instructor is no human, elf, or even centaur, but an etheric dragon so stealthy and with wings so tattered that he appears as little more than a swirling flight of leaves when he moves.

The great city of Penrus, capital of the world (or so the Penran centurions would have you believe), is mirrored by a giant necropolis on the Ethereal Plane, were souls manifest before they make their pilgrimage through the Black Gate to the Land of the Dead.  Around it is a murky wood of trees bent by the weight of time and twisted by etheric currents.  Young etheric dragons hunt here, ignoring properly manifested souls on their pilgrimage but devouring anyone who strays from the path, be they alive or dead.  The etheric dragons are especially fond of hunting mortal spellcasters and occultists, who tend to have rare books and relics the dragons can pore over when they take up adult lairs in the Deep Ethereal.

I have so much reader mail to reply to.  You have been heard, readers!  Your words are loved!  Stay tuned and I’ll respond as I can carve out the time.