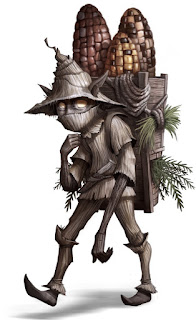 (Illustration by Nikolai Ostertag comes from PathfinderWiki and is © Paizo Publishing.)

First of all, look at that fastachee art.  That is awesome.  Nikolai Ostertag knows his business.  It reminds me of Skottie Young’s work on Marvel’s various Oz series—that delightfully over-jointed, cobbled-together, natural-but-not look.  I love it.

Second, it’s so nice to to get a Native American (Seminole and Miccosukee, to be precise) monster that still fits so seamlessly into the (by and large) Eurocentric fey family.  I feel like I could use these in practically any campaign.  (Plus I’m sure there could be rice and manioc-themed fastachees too).

Third, holy crap, a Tiny fey at CR 11!  Which makes sense, when you realize this fey can sense—and cast spells through—any ear of corn within 18 miles.  That means it can baleful polymorph or flame strike you from a day’s ride away.  Tick one off, and you better have some teleport spells handy, because you could run a half marathon and not get away from it.

It’s going to be rare that parties fight one of these “Little Givers” (as they’re known in Seminole mythology).  They're neutral good and the literal manifestation of the life-giving properties of the corn plant, after all.  Still, if the PCs throw their weight around too much in a settlement a fastachee has adopted, they might encounter subtle reprisals.  And if PCs are part of a disproportionately more powerful force—say, a colonial expedition or invading army—or if they visit wholesale destruction too near a fastachee’s domain, the corn-silk gloves might come off.

Most fastachee are benign…but when they go wrong, the results are terrifying.  Adventurers fleeing from a river town full of deep one hybrids and other horrors make their way into farming country.  There they discover a town whose corn crop is thriving…but the few farmers they meet are skittish and afraid.  Determined to fend off the corruption downstream (or perhaps already corrupted by it himself), the local fastachee has formed the town’s children into a society that is part militia, part mystery cult…and any signs of corruption are to be rooted out.

Ghorans exhibit an almost religious devotion to fastachees.  Some ghorans credit the fey with the creation of the ghoran race, and even those that don’t still have heard tales of a helpful fastachee saving whole ghoran villages from invaders.  Adventurers who are wounded defending ghoran interests might be brought to a fastachee for healing and other aid.  But such help comes with a price—the fastachee might send them on an obscure errand of his own (and he has more than enough ears to keep tabs on them as they carry it out).

Prohibition is a booming business opportunity for adventurers, particularly ones that can fend off drakes with one blade and the revenuers with the other.  When a group of adventurers are contracted to see a shipment of elven spirits safely from Canada to St. Louis, it should be a milk run.  But thin men harry their route south, and a run-in with a spiritualist and some mummies blows their cover in Springfield.  They can lie low with some halflings if they're polite…but if they flash too much magic or any kind of firearms, the fastachee who protects the Small’uns will run them out of town.

Seriously.  The fastachee’s Plant Projection (Su) is one mile per Hit Dice.  And that’s a radius.  For you East Coasters, that’s all of Manhattan and most of the other boroughs.  A fastachee standing in the right place could eavesdrop on Congress and then command plants just outside Baltimore the very next round.  Or, to put a more corn-oriented spin on it, 60 fastachees could pretty much protect Iowa—all of it.

My grandfather was from near Springfield.  And plenty of folks from the generation before him had Prohibition stories, as the Illinois legislators weren’t about to let their whistles run dry when Chicago was so wet.  As I recall, one car mechanic once got a call to go out and fix a supposedly abandoned truck.  By the time he was done, there was an envelope full of money on the seat that wasn’t there when he started, and he decided it was best not to investigate too carefully.