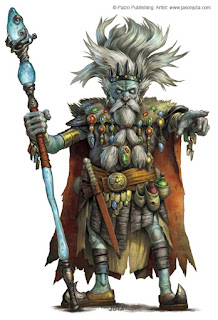 We’re used to seeing the term “magister” applied to particularly powerful or renowned mages, but the term really designates a scholar with the authority to teach others.

…You probably don't want to learn what a derro who has been dosing himself with cytillesh has to teach you.

Suffused (and/or poisoned) by the brain-warping fungus until it courses through their gray mater, derro magisters have taken the steady of derro “scholarship” to its (il)logical conclusion.  Along the way, the derros have imbued themselves with enough cytillesh to gain the powers of a mesmer…and driven themselves to psychic incoherence and madness to boot.  Even without class levels, a derro magister is the ne plus ultra of its race, able to hypnotize others with a look.

Perhaps for that reason, you’ll notice the description in the Occult Bestiary involves a “spiked, gem-encrusted coronet.”  There is rarely separation of powers in derro society—the most powerful and maddest derro (usually the two attributes go hand in hand) makes the rules.  Other derros might succumb to paranoia or a variety of other mental diseases, having to hide away from their fellows or jealously guard their experiments.  But with a mesmer’s power to impose his will on others, even the most paranoid derro magister can remake his cabal in a fashion that fits his delusions.

Adventurers need to find help for their friend, whose brain has been latched onto by a parasite (a fiendish carbuncle that causes bleed damage if removal is attempted).  Given the parasite’s empathic and physical hold on their friend, they need the services of a surgeon able to operate psychically as well as medically…and that means turning to a derro magister.

The Azure King is a derro magister who rules a demiplane of fungal-induced dreams and strange fey creatures.  He thinks he is involved in an eternal game of chess versus his fiery opponent, the Lord in Orange…but really, the Lord in Orange’s domain is simply an elemental cyst that got absorbed by the demiplane.  The “Lord” (a fire elemental) and his magmin pawns have no idea why the magister directs his troops against them in highly ritualized combat.

Why has no one made a “Yakko Says ‘Ehhh… ’” supercut yet?  I really wanted it for my intro.