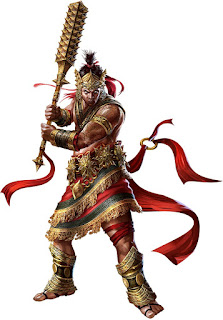 (Illustration by Tomasz Chistowski comes from the Paizo Blog and is © Paizo Publishing.)

Danavas may seem like a bit of a departure on Bestiary 5’s part.  Up until now, Pathfinder’s titans have either owed their inspiration to Greek mythology (for instance, the hundred-handed hekatonkheires) or have been strictly fantastic creations (thanatotic titans)—with Elysian titans splitting the difference.  Danavas come from Hindu mythology, so to see them mingling with Greek giants is a bit of a surprise at first.  But given that we mix Victorian faeries with ancient Greek satyrs under the label of “fey” without blinking, we shouldn’t stress about calling danavas titans…especially since the ancient Greeks and Indians actually did semi-regularly trade and war with each other, which the ancient Greeks and the Victorian English certainly didn’t.

Besides, danavas are properly ancient, from-the-bones-of-the-earth kinds of monsters in the same way titans are.  In fact, Pathfinder goes one step further, making them mythic creatures of Law, central pillars of existence itself.  (And, “pillar” is exactly the right word to use, as that is what particularly powerful danavas who oversee aspects of existence are called.)  Other titans wish they were as ur- as these ur-titans.

Fans of epic stat blocks will enjoy the danava—how can you not like abilities like Iron Resilience (ignore the thing!) or Devastator (bypass all the things!) or attack rolls that start at 40.  But more importantly, a danava is surprisingly easy to work into the game, despite its absurd CR 24/MR 9 challenge Rating, because of its absurdly lawful nature.  You already know I’m a fan of lawful opponents—sticklers for rules are often way more fun to play than simply evil villains, and way trickier to eliminate or subdue without making powerful enemies.  Plus, danavas are so ancient and powerful that humans aren’t even covered by the laws they’re following.  (Hell, even elves and demons are just a passing fad to them.)  If you think of a planet as a house with a leaky roof, a human city is the wasp nest the danava knocks down so she has a place to put the ladder when she climbs up to fix it.

Which makes danavas the supreme case of the lawful cure being worse than the chaotic disease.  Hundun invasion?  Demonic incursion?  Great Old One rising from the deep?  Those things all suck, but they're nothing compared to what will happen if a danava wakes up and decides to “help” get rid of the problem.

Adventurers have been foiling plots by the mysterious hunduns for years now.  Finally, at the apex of their careers, they understand what the faceless aberrations were after: shards of the World Egg, the primordial container of the Creation that the hunduns intend to reverse.  The adventures face their nemesis, a supremely powerful hundun occultist/necromancer…but the echoes of their conflict ripple across the multiverse, waking a pair of danavas who are determined to smash every last fragment of the World Egg, as well as anyone else in the vicinity (which they define as the entire nearest country).

The cold-iron-fearing daoine sídhe (treat as high-level elves with the fey creature template) speak of their aes sídhe forbears garbed in glittering bronze.  And should they be found in their hidden lairs deep in the Otherworld, the aes sídhe (as above but with mythic ranks) will tell you of their parents who were also gods: the Tuatha Dé.  Buried, trapped, or perhaps just slumbering in their city beneath the waves, these majestic lawful titans are so advanced beyond their chaotic fey childer that the family resemblance is almost unrecognizable.

An entire layer of Hell is missing.  In a time before the Lord of Morning fell from grace to become the Archduke of Night…in a time when there were no pits of punishing fires because no crimes had yet been committed…a danava pillar ruled that pitiless realm.  Having been woken from his slumber, he simply marched across existence and took the lair back—literally, as he simply dragged it away.   Now both the pillar and one-ninth of Hell are simply missing, and the entire multiverse trembles at the implications.

We’re finally at letter D!!!  Sorry it took me so long to get here.  If it’s any consolation, at least I didn't paralyze half my face with stress this winter—no, really, that’s a thing that happened last year—so as much as my more laid-back approach to posting pains both me and you, it’s probably for the best.

Last night thanks to my old roommate I got a tour of the new building for my old radio station, and was on the guest list for a live show from the Great American Canyon Band to boot.  After so long away, it was a nice homecoming of sorts.

Also, I want to thank everyone who came out to Light City last week.  I figure with 5,000 of you following this blog, at least one of you got to enjoy some of the art or one of the performances.  The festival was definitely a success—they were expecting 300,000 and got roughly 4—so I’m crossing my fingers that a) it happens again, and b) I get to write the advertising again.

Last Tuesday’s show!  Including the Sun Days, Frankie Cosmos, Against Me!, Sturgill Simpson covering Nirvana, and more more.  This is a good one, so if you’ve never clicked, this is an excellent week to give into temptation.  Stream/download it till Monday, 4/11, at midnight.  If you have trouble with the stream or want to keep the show forever and ever, Save As an mp3.