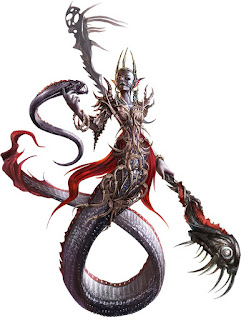 (Illustration by Tomasz Chistowski comes from the Paizo Blog and is © Paizo Publishing.)

If there’s one thing that’s true of deep-dwelling sea creatures, it's that they take the familiar and turn it up to 11.  Starfish go from five arms to north of a dozen.  Eels become gulper eels.  Sharks become frilled, goblin, and ghost sharks. And that’s not even counting snaggletoothed horrors like anglerfish and dragonfish.

So deep merfolk are merfolk…but even more so.  Even more xenophobic.  Even more difficult to find.  Even more beautiful and exotic.  Even more deadly, if you cross them (and given how many undersea terrors a party of bumbling adventurers could bring down upon a merfolk tribe, simply entering their territory could be considered crossing them).

Also, deep-sea creatures tend, to our surface-dwelling eyes, to be exaggerated to a fault.  So too might deep merfolk—particularly as different tribes dwelling in isolation along different crevasses and continental shelves might have wildly different cultures.  You can play them as consummate illusionists, fearless hunters, resigned Dagon cultists, bioluminescent-painted ravers, petroglyph-carving mystics, and more—and all in a single campaign, if your adventurers travel widely enough.  The oceans are vast, leaving room for a panoply of deep merfolk tribes and individuals as diverse as anything humans have to offer…perhaps even more so.

An illusionist is working on a prestige effect—a specialized arcane discovery similar to a bardic masterpiece.  To complete it, he needs to study with a particular master of illusion he’s found named in a single water-stained scroll.  It turns out the illusionist is one of the deep merfolk.  Getting to the master will be its own adventurer, as a kraken has stationed minions up and down the canyon where the deep merfolk mage resides.

Adventurers have been treated well by a deep merfolk tribe on previous visits.  This time, though, their reception is strained.   The merfolk are Dagon-worshippers, and his priests have demanded a price—the head of the party’s paladin or a night of coupling with Dagon’s servants in the spawning grounds—that the merfolk feel obligated to pay.

Adventurers are planning to heist a magical font from the Malachite Magister.  Breaking open the vault means navigating a series of traps, including some on hostile demiplanes.  A source informs them that to traverse the third door they need to be able to survive a watery chamber with the crushing pressure of the bottom of the ocean.  A deep merfolk rogue would be the perfect accomplice for the job, assuming one could be hired.