To say I am a cat person is an understatement.  (If I did not have allergies, I swear I would have five.  And I would be creepy about it.  Like, I’d name them all after Roman emperors and give them each their own Instagram account.  …I should stop talking now.)

But even I am willing to acknowledge that yeah, if you die in your house with only your cats around, they are probably going to eat your corpse.

The nekomata goes one better: It doesn’t eat your corpse; it animates it—just by licking it!  Oh, and the animated corpse is a free-willed juju zombie or skeletal champion, because of course it is.

But let’s go back a second.  A nekomata comes about when a cat lives past its allotted lifespan.  Should that happen, the cat becomes an evil spirit, grows in size (with its tail splitting in two along the way), and begins casting spells and taking on the shape of nearby humanoids.  It then goes about humiliating them, ruining their reputations, driving them mad, killing them, and then animating the corpses—starting with the family that loved and cared for it.  And after everyone is dead, it picks a new family and starts all over. For no reason than that it overstayed its welcome in life.

In other words, it’s a goddamn CAT-LICH. With a SNUFF-CEST FETISH.

I love having a fresh shapechanger-that-impersonates-your-friends-and-neighbors to work with, especially one with a bit more CR heft than the doppelganger.  I love the friendly housecat suddenly becoming a malevolent beast merely because it had its claws too deep in life to die.  And I’m a sucker for any living creature that creates undead—lookin’ at you, pukwudgie!—and the fact that the nekomata creates intelligent undead is just icing on the cake.  And since it’s a reputation destroyer, put it in any context where honor and shame are on the line—samurai clans, knightly orders, paladins on crusade, etc.—and it can do damage in your campaign that far outlasts a single encounter.

This would also be a killer monster for a solo adventure or one-shot. Next time you want to run a game for just one player, or if one character needs a side quest for character development or XP catch-up, the nekomata is waiting

Beset by orcs from the Wastes and fevers borne by the yearly swamp flooding, the city of Engelyn prospers because of the ceaseless labors of Kelman the Robed.  With no heir to take up his mantle, he has extended his life twice through dangerous magic so that Engelyn remains protected.  But the same magic preserved his feline familiar…with dire consequences.  While Kelman was away fighting orcs, the cat became a nekomata under the black of the new moon.  The magical creature then triggered the wards which seal Engelyn Castle from disease, trapping the duke’s family and his retinue inside a magical bubble.  Now the nekomata stalks the halls in stolen shapes, murdering as it goes and creating undead monsters in its wake.  Adventurers in the duke’s service must act to save the duke’s family—and themselves—or the entire household will be slaughtered before Kelman can return to undo the ward.

Adventurers are on the trail of a necromancer…or so they think.  Actually, they hunt a nekomata that was once a barge cat.  The nekomata happily goes from town to town along the river spreading undeath.  If it realizes the adventurers are on its trail, it tries to frame them as necromancers instead.

A nekomata impersonated Lord Tono, and its actions nearly sparked war between the Third Shogunate and the ninja clans of Cliffreach.  Outraged, the shogun demands Tono cut his hair and make the Walk of Repentance or be executed.  Tono plans to acquiesce, but his son, First Lord of the Admiralty, swears to lead the navy in revolt if his father is so shamed.  Tono’s wife, once a renowned geisha, uses her underworld contacts to recruit sellswords to find the nekomata and prove Lord Tono’s innocence before the Walk occurs.

There are hints of Daniel Polansky’s Low Town in that first seed.

Also: Hey, nekomata, whaddaya say? / I just got back from the auto-da-fé

That’s been in my head all day, and now it’s in yours.

Switching gears entirely, have you guys been following Lindsay Ellis?  She always kills it, but she’s been killin’ it to the killeth power lately.  For a critical one-two punch of awesome, check out her look at the male gaze in Michael Bay’s Transformers franchise and her take on the theme of fatherhood in Guardians of the Galaxy Vol. 2.  Both are must-watches.  (And since I referenced Mel Brooks’s Spanish Inquisition song, maybe check out her take on his movies, too.)

Oh, and if you’re looking for the narwhal, it’s here.

YOU’RE NOT PUNK / AND I’M TELLING EVERYONE 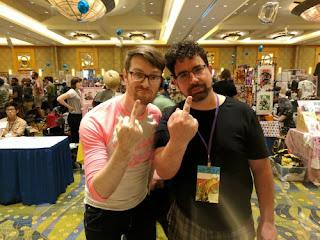 Oh, and I finally met my Dream Daddy.  Specifically, Dream Daddy director/lead developer Tyler J. Hutchison. He was at SPX, conveniently tucked between Abby Howard (of Strip Search/Junior Scientist Power Hour fame), who I was excited to meet, and writer/illustrator team Matthew Swanson and Robbi Behr, who I went to college with.

Naturally, Tyler and I got someone to take our picture.  Three guesses who we sent it to.