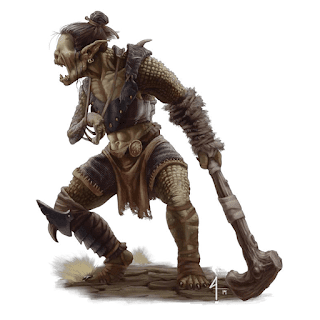 (Illustration by James Krause comes from GeekDad and is © Paizo Publishing.)

We’ve covered mutants in this space before—the Inner Sea Bestiary’s Mana Wastes mutants, of course—but Bestiary 5’s mutants are their own breed and deserve their own entry.  Besides, by and large Mana Wastes mutants all fit mostly the same mold (or template, as it were): the same ability bonuses, a shared list of benefits, a few acid- and disease-focused special abilities, and a small menu of deformities…which makes sense for mutants all forged in the same brutal crucible.

On the other hand, Bestiary 5’s mutant template throws open the ability bonus/penalty doors and unlocks a pretty full spectrum of 20 beneficial mutations and 12 harmful deformities for the GM to choose from.  This allows you to customize your mutants at the colony level (maybe all the mutants in this sewer have gills…) or by individual (…but the one about to sneak attack you also has an extra arm and a terrible stench).  (Oh, and wouldn’t you know it, 20 and 12 just happen to be numbers you have icosahedral dice for—perfect for those of you who love rolling on random mutation tables like it’s 1978.)

Once you’ve statted up your mutants, it’s time to turn to the eternal questions: 1) How did they get that way; 2) is however they got that way another wrinkle/challenge you can use to enrich your players’ experience (swamp muties gonna swamp, but is that swampiness reflective of their environment or perhaps because of a radioactive MacGuffin?); and 3) what do they want right this minute?  Fantasy RPGs being what they are, usually what these fantasy mutants want right this minute is not to found an integrated private school in Westchester, NY, to learn to hone their powers in a world that hates and fears them (RIP Len Wein, BTW), but rather they’d prefer to club the PCs’ brains in and roast them on a spit.  After all, swamp muties gonna swamp.

Adventurers are cornered by mutants in a radioactive wasteland.  They are quickly overwhelmed and nearly pummeled to paste by a three-armed ettin.  At the last minute, they are saved by the appearance of an undead creature with glowing eyes and sore-covered, flaking orange skin.  This is one of the irradiated dead (see Pathfinder Adventure Path #87: The Choking Tower), and its very presence inspires terror in the mutants.  If the adventures defeat the ravening undead—particular if they use divine magic, which the mutants have failed to master—the twisted humanoids are willing to parley with the adventurers.

The Bone Star is not a star at all, but a miles-long satellite roughly resembling a human femur.  Normally a teleportation gate connects the two ends of the Bone Star, allowing the telepathic sages on each extremity to pursue their research, trade ideas, and share shipments of food and supplies from the worlds beyond.  But when the gate goes down and a solar cyclone delays the resupply ships, adventures must venture into the mysterious and disused central shaft.  Here the biosphere chambers were long ago overrun by sentient molds, malfunctioning robots, and mutant descendants of the original scientists who failed in their stewardship of the satellite.

Mutations are a plague in most subterranean realms.  Some even breed true—the drow underclass of Civ Po’Dan are extremely quick but bird-boned, while their counterparts in Chevar Yith tend toward armored scales and mad fits of rage.  Meanwhile, one in five troglodytes is born mindless; their sacrifice to the roper philosopher-beasts is a tradition on its way to becoming a sacrament.  The mutations are actually a side effect of the ceremonies that imbue drow nobles with their magical legacies.  If anyone knew this, it would change the politics of the Underrealms forever.

Last time I was posting late because of the eclipse; this time I was busy with the usual hospital stuff and helping my mom celebrate my dad’s 70th birthday.  But I’m thrilled as always to be back hanging out in your Tumblr feed!

Bummed to see James L. Sutter move on from Paizo but psyched for him as well.  I don’t have enough hours in my day today to give him a proper sendoff (hell, I still owe Wes a proper sendoff and his departure was in May) but suffice it to say I’m a big fan of James, I’ve enjoyed every one of his books I’ve read and our interactions out in Seattle (he was my tour guide through the Paizo offices), I think he’s making a smart move, and I wish him all the best.

Oh snap!  Only a few hours left to stream/download my first show of the fall semester!  (The link expires at midnight.  Sorry about the tardiness, guys.)  While it lasts, enjoy Labor Day tunes for you rebellious proles and some wistful tunes for you sophomore sad sacks.  If you miss it, don’t worry—there’s a new one happening tomorrow (Tuesday night, 09/12/17) at 10 PM U.S. Eastern.  Tune in!