Having checked off the nymph, dryad, oread (well, sort of; don’t get me started), nereid, oceanid, and even the cave-dwelling lampad (talk about a deep cut, amirite?), the Bestiaries were way overdue to serve up Greek mythology’s naiad.  But with nixies, nereids, and rusalkas all operating in a similar design space/ecological niche, there just hasn’t been the urgency…until now.

The good news is, it was worth the wait.  Not only do we get a decent low-CR fey creature—I like the inspiration tokens that recall Pathfinder’s Fey Revisited book, and the water bond is true to mythology while being more flexible than the dryad’s tree bond—but we also get naiads as a player character race as well!  That’s right, you can now play a full-on fey straight from your favorite myth.  (And we’re not talking just Greek myths—you find near-human river spirits in folktales across the world.)  If you want a wise, sorcerous master of water, play an undine, but if you want to play a mysterious, charming fey with a mystic connection to the rivers and streams around her, the naiad is ya girl.

The naiad also lets us do something we haven't been able to do as much on this blog lately: talk about the thematic potential of a monster.  (That's a problem once you get to the higher-number Bestiaries—you get more original monsters, which is great, but they lack the years of shared folklore and fictional heft that more established creatures have accreted.)  And naiads suggest at least two themes worth very worth exploring:

The first is transformation and journeys.  In myth, naiads are constantly getting transformed into other things: rivers, plants, animals, and so forth.  Now that’s not something you have to literally have happen in your adventures (aside from the odd baleful polymorph).  But I think on a metaphorical level it ties nicely to the naiad’s ability to shift her water bond.  You can easily imagine a naiad PC shifting her bond as she adventures…from the local creek to a nearby stream to the wide river…and then to waters she has only dreamed of…fast rapids, raging waterfalls, even great inland seas. At the same time, she’s also changing as a character, growing in terms of power and responsibility.  Your naiad PC probably won’t be turned into a laurel tree like Daphne, but she may be unrecognizable by the time she completes her final quest.  Water is always flowing, always moving, traveling across the world, taking new shapes and touching new shores as it goes along…why not your naiad PC, too?

The second theme is why so many of those mythical naiads wind up getting transformed into something else: assault/rape, lack of consent, and the aftermath thereof.  In these tales, naiads are always being chased by Zeus/Apollo/Pan or any number of minor gods or satyrs…and when they quite sensibly run and call for help, they tend to wind up transformed into something else.  Which is, when you think about it, a pretty goddamn high cost for not giving in to assault.  Take Daphne: She asked her father to save her from Apollo, and his best answer was to turn her into a laurel tree for the rest of eternity.  Gosh, thanks Dad!  Syrinx, fleeing from Pan, got it even worse: Her sisters turned her into a reed…and Pan, not sure which reed was her, cut them all down and then made the first panpipes so he could still hear her mournful voice every time he blew on them.  And most books still tell this story like Pan is a rascal who just went too far this one time.  Is that isn't male supremacy BS, I don't know what is.

But at your gaming table…in your myths…maybe the story doesn't have to end that way.  Maybe the PCs can step in and stop the assault.  Or maybe they can get justice for the transformed naiad.  Or, if you’re playing a naiad PC, maybe an assault is what launched her adventuring career...because she’s determined such an act won't be the end of her story, but rather its beginning.  No one can cut her down if she’s the one wielding the blade.

This is tough material to tackle sensitively, and not appropriate for every gaming table.  But if your group is a group that can handle hard questions and big themes, naiads offer a window into stories that don’t usually get told in an ordinary dungeon crawl.

Adventurers are warned that a certain fey lord is bound to betray them.  They will be put to sleep for 100 years, pixy-led into another realm, offered fruit that will trap them in Faerie, given seven-league boots that will rip them in half the first time they're used—any number of these awful fates and more.  Prepared for this, the adventurers are stunned to find the lord to be an amiable host, who immediately and publicly names them his guests, offers them safe passage, and aids them in their quest.  It is only on their return to his lodge that his trap is sprung.  The fey lord’s daughter is a naiad whom the demon-possessed satyr Blackhoof has named as his betrothed—whether she consents or not.  Blackhoof is coming to take his intended away with him this very night…and the adventurers, having partaken in the oaths of hospitality, are honor-bound to defend her with their lives while the fey lord watches.

A naiad gives a ranger her token, fortifying his will and steadying his hand so that every arrow he fletches flies a little straighter.  Unfortunately, at the next river he comes to he is immediately set upon by boggards.  The boggards are the thralls of the naiad’s jealous sister, who recognizes her sibling’s token and is determined to slay anyone who bears it out of spite.

The new dam at Carter Bridge is weeks behind schedule.  The delay is the fault of a naiad who has been working to charm, distract, and if necessary harm the workers there, fearing what the dam will do to her beloved stream.  But the snows were heavy this year, and if the dam is not built, the snowmelt may destroy whole villages during the spring floods.  Adventurers may use force or diplomacy to bring the naiad to their side.  If the dam is built, though, the change from wild stream to man-made lake causes the naiad to morph from female to male.  How the naiad reacts to this gender transformation could be the germ of many adventures to come…

Do you find a race of comely, all-female nymphs to be a somewhat sexist notion?  Guyads are a thing in Pathfinder, so I’m sure gaiads are too.

Looking for the myrmidon?  Look way back here.

Audio News #1: Last June I was on the Pathfinder comedy podcast Laughfinder (find out more here and here).  It was absurdly fun, and I’m delighted that my out-of-game rivalry with fellow (and much more professional) DJ Aaron Henkin has since become a running joke on the series.  (Laughfinder has also since been nominated for the City Paper’s Best of Baltimore awards!)

The guys were kind enough to ask me back to reprise my role as the shapechanging urban ranger Renn Tallshoe in their special end-of-season epilogue. 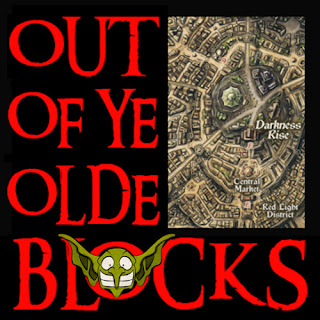 This is a bit of a weird episode, as it’s inspired by Aaron Henkin’s award-winning Out of the Blocks series.  So we trade the laughs and Dick Jokes™ for wry chuckles and a more thoughtful look at Red Point and its citizens.  Nevertheless it’s a lot of fun and features a number of Baltimore comedians, including special guests Erik Woodworth, Todd Fleming, and Bunny Themelis.  Enjoy!

Audio News #2: Ohmanohmanohmanohman.  It’s Tuesday’s radio show!  Youguysyouguysyouguys, I’m really excited about this one.  New SPORTS, new Phoebe Bridgers, Sufjan Stevens “Illinois” turns gold, and more!  This episode is a keeper, so stream/download here.  (Sadly, because I’m posting this on Blogger pretty late, the link is only good till midnight tonight (Monday, 09/18/17).  That’s less than an hour away, so grab it now!)

PS: Seriously, oh my God, the SPORTS happens at minute 2.  Trust me.