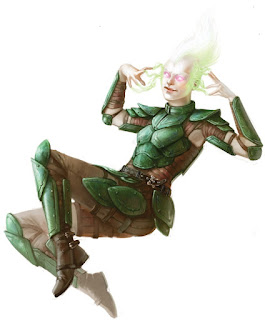 (Illustration by Kim Sokol comes from the Paizo Blog and is © Paizo Publishing.)

After all this time, I think we finally have it: a worthy subterranean human race.

Drow have elves.  Dwarves have duergar.  Gnomes have svirfneblin.  Orcs have…well, orcs.  Halflings have no one cares (or dark creepers if you’re being kind).  You get the idea.

But subterranean humans have tended to be confined to lost cities or are so corrupted/devolved by life underground that they are no longer recognizable human.  In the first category we have “basic”/Known World D&D’s Cynidiceans, Greyhawk’s Lerara (once again I’m pointing you to the excellent Dragon #241), and Forgotten Realms’ Deep Imaskarri.  In the latter, we have morlocks, dark folk, and even (in certain canons) skulks or derros.  Those are great races, but none are what you’d call human anymore (and only dark folk really build civilizations of their own, rather than squatting in caverns or occupying ruins).  Unless I’ve majorly overlooked something, we’ve never had a human race that was both recognizably human and spread out throughout the Darklands/Underdark/Deepearth.

And then here come the munavris.  Are they human with a dash of something extra?  Sure, they’re telepathic albinos.  Do they have a distinctive culture?  Yeah, the telepathy and the need for genetic diversity have led to open minds and even opener relationships; they also worship the empyreal lords and fight in jade armor.  Can they go toe-to-toe with the drow and duergar realms?  They don’t have to, because they sail purple-sailed ivory ships across subterranean seas, battling urdefhans and retreating to jade islands that ward off aboleths. And to top it all off, they’ve got a neat object reading ability that lets them use almost any device—including weapons, armor, or spell-trigger items for a short period of time.  That alone makes them instantly iconic.  (And you can even play them as a PC race!)

All in all, I think the munavri are a real coup.  And they belong on the underground seas of your game world.

Based out of the sunken city of Mushroot, adventurers find a magical torc made of a metal they don’t recognize.  Assuming they can smuggle it past the duergar tax agents, their dark dancer fixer agrees to set them up with someone who can help.  He arranges a meeting with a strange, pale humanoid.  The woman, who calls herself a munavri, barely needs to touch the item to recover the command word, and offers hints as to its origin. But she will not reveal more until the adventurers allow her to accompany them on their journey.

Most airships don’t do well on seas—and they have no business being underground!  But when a waterspout seizes the Falcon’s Promise and plucks it out of the sky, that’s where a party of adventurers find themselves: floating on a vast ebony lake in an unthinkably large cavern.  An encounter with a water orm goes badly when a jittery crewmember looses a harpoon at it.  They are only saved by the arrival of munavri corsairs, who warn them that far worse threats await them if they cannot get their ship aloft or under sail soon.  (And how they will get back to the open sky is another question entirely…)

The Spear of Prophecy is a jagged shard of jade the size of a mountain erupting from the Stillwind Plains.  A monastery sits about halfway up, carved into the Spear itself.  Pilgrims who go to treat with the light-shy, prophecy-spinning monks, oracles, occultists who dwell there have no idea that the monastery leads all the way down to a sunken sea miles beneath, patrolled by the monks’ far more piratical kinfolk.

Personally, I’m not enough of a sci-fi or old-school psionics fan to really geek out over telepathy.  If I were running a campaign I’d probably skip that and just concentrate on the advanced object reading—that’s an awesome enough mental power for any race.

On another personal note, I’m really conflicted by the munavri art. It’s excellently done and all the details are right—that jade armor even actually looks wearable!—but the overall sense is off.  I totally get how it happened…the art order was probably for an agile, good-aligned, albino human psychic race in jade armor…and the artist delivered.  But the pose is that of a fey trickster—every time I see it, I get the sense that if we filled in the white background, we’d see this munavri lounging on a toadstool chatting with Alice and the Caterpillar. For a sense of munavris as badass, aboleth- and urdefhan-fighting sailors of subterranean seas, Darklands Revisited’s art is sketchier in detail but more on point in terms of tone.