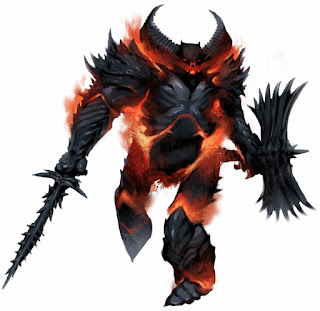 (Illustration by Kieran Yanner comes from the Paizo Blog and is © Paizo Publishing.)

Hold on to your tophets, ladies and minotaurs…it’s Moloch time!

Moloch’s inspiration is a Canaanite god who gets a lot of bad press in the Torah and the Bible—two holy books that, let’s be fair, don’t exactly have a track record of playing nice with the neighbors.  But Moloch also gets some pretty bad press from the Greeks and the Romans, and the phrase “child sacrifice” gets thrown around a lot, so I’m perfectly fine with him being used as an archdevil.  (There’s actually a post floating around the Paizo Blog that basically says, “Well, that’s kind of how religion worked in those days”…but I possess the ultimate authority on good vs. evil—Monte Cook’s Book of Vile Darkness (what, you were expecting Spinoza?)—and it firmly puts child sacrifice in the Evil category, so screw Moloch.)

In early editions of AD&D, Moloch ruled Malebolge as Baalzebul’s viceroy.  In 3.0 and 3.5 Moloch had an even rougher time of it, getting replaced first by the Hag Countess and then Glasya.  Pathfinder’s Moloch, on the other hand, is firmly in control of both the Sixth Layer and indeed all of Hell’s armies.  If you’re looking for a devil who’s a servant or a patsy of another power, Pathfinder’s Moloch is definitely not it.

Probably the four most interesting things about Moloch are as follows:

1) Moloch is publicly worshiped.  Devil worship is not popular, by and large.  Even for truly dastardly faith communities, worshipping gods, even evil ones, is a safer bet than worshipping beings that explicitly come from Hell.  (“Would you like to spend eternity building a pyramid for the Pharaoh God of Taxation and Making Slaves Grovel?  Or go to the place with the fire pits and devils and eternal torment?”  “Gosh, the fire pits do sound appealing.  But seeing as I’m already experienced at being taxed and groveling...Imma hafta stick with what I know.”)  So devil worship is usually a cult thing.  Heck, even Asmodeus isn’t that popular in any land where he doesn't have governmental backing—without a throne, inquisition, or similar power structure in place, his church is at best seen as a necessary evil.  The other archdevils’ cults mainly stick to the shadows.

But not Moloch.  His worship happens out in the open.  His followers build giant sacrificial ovens.  Whole armies subscribe to his message.  Of all the archdevils, he is the one most likely to be worshipped under the glaring eye of the midday sun.  And he gets that worship, because…

2) Moloch is responsive.  He answers the prayers of his followers—often in a quite literal and personal fashion.  Is your village threatened by flood?  Forget subtle shifts in tributary courses—Moloch just shows up in avatar form and dams the river.  Is an army about to ransack your town?  Moloch’s army is bigger, assuming he doesn’t just squash the looters himself.

Yeah, the price for this prompt and professional service is an eternity slaving away in Moloch’s army for anyone who asks for his aid or offers even the slightest hint of praise.  But when floods, rapine, and slaughter regularly threaten your subsistence-farming-level existence, being a mule skinner for an archdevil might seem like a decent trade, especially if you don’t have to pay it off till you’re dead.  Which means that Moloch has a surprising number of worshippers, despite being a walking metal furnace that swallows victims whole and to burn alive in his stomach.  Speaking of which…

3) Moloch has interesting symbolism and visual associations.  Which means interesting worshippers and sidekicks.  He’s got a bull thing—use some minotaurs as his cultists.  He’s got a furnace/child sacrifice thing—use the tophet.  He’s got a walking, fiery suit of armor thing—there are tons of constructs, golems, elementals, devils, and undead like that.  And he’s a general—which means animate war machines like juggernauts or colossi.

With a lot of archdevil nemeses, the PCs’ journey fighting their servants goes tiefling —> lesser devil —> medium devil —> nasty devil—> archdevil, with maybe a fiendish dragon or something in there for variety.  Moloch’s followers are waaay more interesting that that.  Literally any soldier of any race might be found in his legions, either living, undead, as a fiendish version of itself, or as some kind of twisted einherjar.  Pick up thematic cues from his description and his mythology and go nuts.

4) Moloch is a general.  He’s the leader of Hell’s armies.  This means facing him is going to be like facing any general with godlike power.  He’s going to have lots of troops he can call for aid.  He’s going to have aerial assault teams and assassination squads and giant hellfire-fueled juggernauts.  He’s going to be physically powerful himself, and canny and strategic as well.  If you come at him, you risk literally having all the armies of Hell chasing after you.

That said, it also means he has other fish to fry.  He has Heaven assaulting one front and the demon hordes assaulting the other.  He has lesser generals and colonels who want his job.  He has some mighty demanding bosses to please.  And, as noted above, he’s very attentive to his flock.  No matter how big you think your beef with him is, you’re probably the lowest item on his to-do list.

Which means you might be able to sneak into his vast army camp and ambush him.  You might be able to challenge him to single combat to gain some small concession.  You might be able to put a treaty in front of him to sign.  Keep your goals reasonable and small, and he might just to decide to send his flunkies after you in retaliation rather than deal with you personally, or burn your great-grandchildren to cinders a few generations from now…but that’s their problem.  Generals are patient, generals can wait, and generals pick their battles.  He will always come down on you like a hammer, but it might not be today.  And when dealing with archdevils, those are as good odds as you’re going to get.

Adventures are asked to investigate a so-called Children’s Crusade, only to discover it is a sham—slavers are herding the children (and their hapless friar guardians) like cattle to boats crewed by gnolls, hobgoblins, witchwyrds, denizens of Leng, and worse.  The trail leads past strange cyclopean isles to a forbidding and cruel coastal nation of military dictators.  There the children are to be fed to giant, animate tophets meant to fuel the archdevil Moloch’s fires in Hell…unless the brave adventurers step in.

A solar and an uinuja formed an unlikely friendship, despite their differing ethics, spheres of influence, and relative power levels.  Now the solar languishes in a Hellish prison, and the plucky azata wants to do what even the archons do not dare: stage a rescue, even if it means facing the Lord of the Sixth himself.  Fortunately, she knows some adventures who are just as plucky—or crazy—as she is.

The cult of Mithras has spread throughout the Roman Empire—in particular, throughout the Roman Legions.  But as the cult has spread, so have disturbing rumors about secret rites, bloody and fiery sacrifices, and worse.  At first, the Senate and certain famous adventurers chalk this up to the usual politics and rumormongering Rome is famous for.  But then word comes out of Anatolia that the great god Mithras is dead, slain by an imposter who now usurps his throne and perverts his rites.  The usurper is Moloch, and he has turned much of Rome’s military might to his service—for even those who resist his call in life have sullied themselves enough so that he may claim their souls in death.  Worse yet, the dour god Pluto is angered by the potential theft of shades from his kingdom.  His priests threaten that if this Mithras/Moloch is not stopped, Pluto will send an army of undead through the Lacus Curtius to drag the Roman army down to the Underworld, no matter what the collateral damage.  Great heroes have to act—and fast.

(I’ve always thought the rapid spread and equally rapid decline of Mithraism throughout the Roman Empire was pretty fascinating.  So naturally I wanted to give your PCs an excuse to be players in that particular rise and fall.  Now, on to some housekeeping…)

Hi all.  First of all, again, apologies for the absurdly late post.  This article literally sat half-written on my desktop since something like June 18.  We’re talking a month.  Sure, this blog isn't the *daily* Daily Bestiary it once was, but I’ve never been as lax with my posting as that.  Two posts in June and none so far in July is unacceptable.

Toyota earned its reputation for amazing cars not through one outstanding model or innovation, but through a company-wide suggestion system that leveraged lots of tiny improvements.  Unfortunately, the same is also true in the negative.  There’s no one reason I haven’t been able to blog or one big nightmare I had to tackle (okay, there was one—a four-day, 46-hour workweek that sucked beyond measure—but let’s pretend I didn’t say that).  There have just been a thousand tiny distractions and mini-hurdles.  The short version is: June was lame, I had to take some time for me, I probably took too much, and I’m hopping the end of July is better.  Much love and thanks to you all for your patience, yet again. 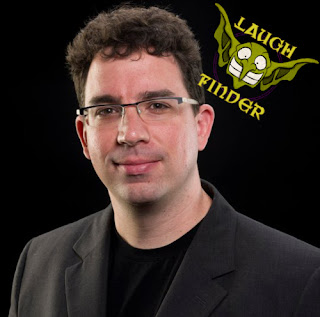 Tumblr folk already know this (so forgive me if I quote myself verbatim) but my Blogger folk don’t: My second episode as a guest of the Laughfinder podcast is up!  Once again, I aid Bryan Preston, Jim Meyer, and Tommy Sinbazo to fight evil conjured by Dorian Gray and Ben Hancock.  Once again there are many NSFW riffs on Baltimore landmarks.  And most importantly, my blood feud with Aaron Henkin erupts into passionate FURY.  Enjoy!

Also once again it’s Monday, and once again I’m wishing I’d posted the archive link for my radio show last week—because this is a really fun show not to be missed, with hot takes from JAY Z, Jason Isbell, and St. Vincent, as well as a look at 20 years of the Singles soundtrack. It vanishes tonight at midnight (Monday, 07/17/17) so stream or download it now!