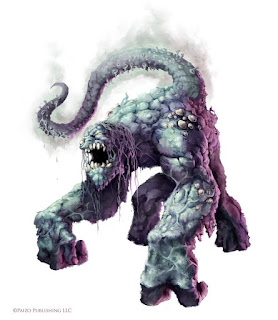 (Illustration by Will O’Brien comes from the artist’s DeviantArt page and is © Paizo Publishing.)

The moldwretch’s appeal for GMs is largely of a problem-solving nature.  It fills a niche when you need a higher-level (CR 7) fungus creature.  It’s a Small creature that nevertheless is pretty powerful (again, CR 7, and 10 Hit Dice besides).  It's got the toughness of the plant type while moving and thinking (Int 14) like a humanoid.  And because it comes in three moldy flavors (or more, if you’re using supplements like Darklands Revisited or some homebrew tinkering), you can keep players on their toes for at least a couple of encounters.

But what a moldwretch is exactly is still up to you.  A prehistoric vegepygmy?  The spawn of some long-ago infection that merged ape and fungus?  A result of drow fleshwarping?  There’s nothing that even says they have to look like the illustration in Bestiary 6—they simply need to have at least two arms, a tentacle, and an orifice for speaking—so they might appear as fungal spiders, tripod-like mushrooms, moldy elder things, or even more outlandish shapes.

A vegepygmy infestation that adventurers had previously cleared out returns again, as if guided by a more intelligent hand.  If they go back to attack the nest a second time, they find passages leading to a different cave system that includes gardens of musical mushrooms, a rot grub-covered dwarf crypt, and murderous moldwretch masterminds still wearing the skulls of the dwarves whose graves they desecrated.

Moldwretches have a complicated caste system devoted to the molds they tend.  A moldwretch may be a gardener, an ascetic, a warrior, a priest, a wanderer, or one of several other roles, depending on the kind of mold it has bonded with.  A given moldwretch will speak of its past roles as if they were performed by another being entirely, even if it has changed several times in a year.

Adventurers exploring a cave system come across a chamber covered in pebbles arranged in geometric shapes.  At first the shapes appear merely decorative, but studying the negative space reveals a message: the Undercommon word for “Help” written over and over.  A growth of moldwretches have become the unwilling thralls of a fungus queen, and they use every spare moment they have to add still more pebbles to their message.  They don’t dare be more direct, as they fear they will either rouse the fungus queen’s attention or accidentally infect their would-be saviors.

And for my Blogger readers, now it’s time for…

Audio News #1:
I like you so much better when you’re naked, and 31 other truths you will learn from Tuesday night’s radio show.

Stream/download all the summer fun now through tomorrow (Monday, 06/12/17) at midnight. 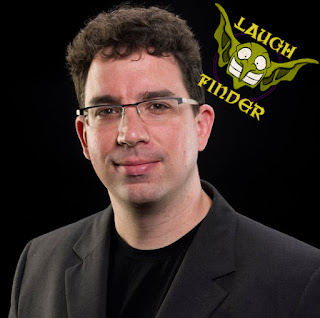 I’m crazy-honored to have been a guest on the Laughfinder podcast this week, wherein I play Pathfinder with actual comedians and Baltimore luminaries of all kinds.

Thrill to the adventures of Aaron Henkin, Bryan Preston, Dorian Gray, Jim Meyer, Tommy Sinbazo, and me!  Red Point tourism (and Red Point’s mohrg population) will never be the same.

Edit: I forgot to mention how unbelievably awesome playing with an audiomancer (i.e. a sound-effects guy) is.  Total game changer, literally.