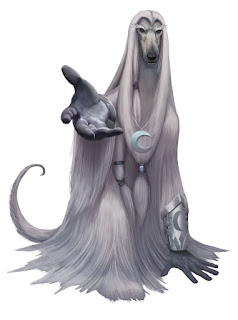 (Illustration by Daniel López comes from the artist’s DeviantArt page and is © Paizo Publishing.)

In Pathfinder’s default cosmology, Nirvana is basically Furry Heaven, with animal-headed agathions and intelligent animals and magical beast being the norm.  Moon dogs split the difference, possessing the intellect and hands of a human but preferring to run about on all fours.  In fact, they split a lot of things: they are devoted hunters who nevertheless aid the weak.  They live in the Outer Planes but hunt in the Transitive and Material Planes.  And like the Jim Henson creations they resemble, they straddle the line between serious (as wise counselors who can magically comfort the afflicted) and totally silly (they dispense said comfort with licks...no seriously, licking is a spell-like ability for them).

As you might have guessed, moon dogs are consummate allies—tough enough (CR 9) to actually hang with a mid- to high-level party in a scrap and loaded with a ton of useful magic and banishing/curative powers.  Unless your PCs regularly side with evil, combat encounters against the wise, neutral good moon dogs should be rare.  Still, they are hunting dogs, so conflicts may occur if PCs invade their territories, attempt to apprehend those under the moon dogs’ protection, or otherwise threaten their pack.

Xills ambush adventurers while they are exploring the Ethereal Plane.  After taking a beating, the party is saved in the nick of time by a hunting pack of moon dogs.  After the battle, one of the moon dogs agrees to stay with the adventurers and aid them with counsel and magical healing, since he has recently come up lame and cannot continue the hunt.  He has an ulterior motive, however: His sister’s pack lost a pup in this area not long ago and he hopes to pick up some sign of the lad.

An intelligent magical khopesh has seduced a moon dog.  While not evil, the blade’s constant challenges to the moon dog to prove his valor have caused the outsider to abandon his hunting pack, walk on all his hind legs, and get himself into some major trouble in some of the seedier multiplanar bars.

Adventurers just killed a legendary—and recently demon-possessed—stag. Congratulating themselves on vanquishing a fiend, they are stunned to find themselves hunted by a moon dog tribunal intent on justice.  If they consent to the trial, they have an uphill climb to prove their innocence—the demon covered the signs of his possession carefully.  If the adventurers flee or otherwise defy the moon dogs, they will find themselves quite literally dogged from plane to plane.

Moon dogs totally get points for having a lunar light supernatural ability that mimics the actual moon dog phenomenon.

Looking for the monkey goblin?  We already covered it way back here.

Email ThisBlogThis!Share to TwitterShare to FacebookShare to Pinterest
Labels: Outsider