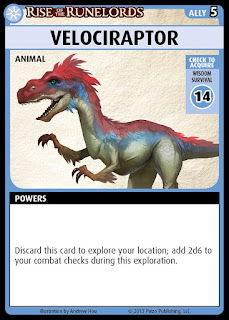 (Image comes from the Paizo blog and is © Paizo Publishing.)

A star of dinosaur picture books for its horned frill, the styracosaurus in the Pathfinder game uses those horns in a devastating defense (up to five attacks of opportunity in a single round).  Meanwhile, the movie star velociraptor gets cut down to its paleontologically accurate size—only one-and-a-half feet tall—but with sickle-like claws and coordinated pack hunting, that’s still deadly enough when facing novice adventurers, particularly those who have never seen a dinosaur before.

Orcs love “spearshields”—their word for styracosauruses.  They goad their beasts into wherever the fighting is thickest, where the dinosaurs’ thrashing can have the most devastating effect.  Orcs paint the frills of their beasts in tribal colors, and knowledgeable adventurers can use this to figure out which tribe is currently in charge—or even to sneak through orc lands themselves, if they have a styracosaurus companion they can paint.

Velociraptors are a constant hazard in the Oni’s Tears, an archipelago favored by pirates, smugglers, spice merchants, and drug runners (the last two often being one and the same).  More than one ghost ship has turned out to be the result of a pack of velociraptors sneaking aboard and eviscerating the crew.

Drought has struck the White Eagle Desert for the third year in a row.  Now even traditionally healthy rivers are drying up.  To the rock gnome village of Mollawud, this means they are no longer protected on three sides by water.  The gnomes need help defending their homes and fields against the velociraptors that are now free to strike at them day and night.  If the adventurers instead try to help the gnomes move, they must defend them along the way against heat exhaustion, fire wolves, thylacines, bunyips, and their fever gnome kin.

Man, you guys have gone nuts with the likes/reblogs this week.  Thanks!

I got several nice private notes from people reacting to this answer I posted two weekends back, and among the lines in one of them was the following:

I’d love for you to continue, as your posts are always fantastic inspiration for my own game, but it sounds like you’re getting a bit burned out.

To which my response was, “Oh noes!  Everyone thinks I’m burned out!”

If you read the other weekend’s post and thought that’s what I was saying, that’s my bad for leading you astray.  I am definitely *not* burned out on The Daily Bestiary—not at all; I could keep this up forever.  There’s just also all this other stuff I want to do too, and only 24 hours in a day.  It’s not a question of being burned out; it's a question of “How do I deliver the most awesome content I can and have fun doing it?”  Ideally I can do The Daily Bestiary *and* all that other stuff, but I also have to pay a mortgage and occasionally sleep, too.  So I’m just trying to figure out how to juggle all of that and still serve up the best entertainment I can, in whatever form it takes.

Which, by the way, is why you shouldn’t panic if I take chunks of the next two weeks off.  I’m hitting crunch time on several work projects and already know I’m working through the next two weekends.  (So instead of looking forward to a day off tomorrow, I’m looking forward to Day Six of a 19-day week—on the last two weekends of summer, to add insult to injury…and guess who had travel plans he had to cancel.  Sigh.)  We should be finishing up Bestiary 4 in the next two weeks, but since I can't guarantee I’ll have enough juice to post, I’ll instead use the time to catch up on some reader mail and otherwise work on my backlog.

See you in a week or two, and keep your eyes peeled in case I do any posting in the interim—I’ll keep you posted in the comments or over on Tumblr!
Posted by Patch at 8:45 PM