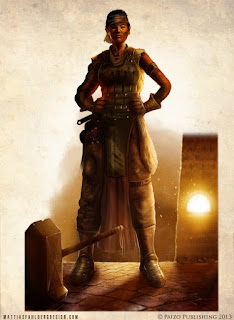 Slag giants, at least on Golarion, are a magical crossbreed of fire and stone giants.  (Of course, in your campaign they might be a natural crossbreed or a discrete species all their own.)  They similarly straddle the two species’ alignment ranges, being lawful neutral, and height (around 14 feet)…but they don’t share in their power, reaching only CR 7.  Their crafting talents accord them special treatment, however, free from the political turmoil that dominates many giant tribes.  Even the few slag giants who are not smiths might turn up in similarly useful intermediary positions—as negotiators, arms dealers, circuit judges, and wandering bards.  Adventurers might occasionally find one sympathetic to smaller folk—perhaps taking refuge in a slag giant’s quarters to avoid fire giant patrols.  More often, slag giants simply wish to be left alone to do their work…and adventurers, while not hated, are too much of a threat to the status quo to be allowed to live.

Charismatic slag giants are more than smiths—they are arms dealers.  Adventurers accompany the renegade frost giant Kellermann to meet one of these slag giant entrepreneurs and secure a shipment of masterwork arms for their lord.  When winter wolves attack, sent by the tribe Kellermann abandoned, the slag giant assumes the adventures set up the ambush and reacts with violence.

Slag giants have a rule: “A man must wield his weapon.”  This means, for instance, that they regard the creation of dancing swords as taboo.  Gunfire, too, is forbidden, as it is the combustion that drives the attack, not the pull of muscles.  When a smithy begins producing firearms in Eaglemont, a nearby tribe of slag giants feels compelled to tear it down brick by brick and sunder every tool.

In Greece, slag giants are actually a creation of Hephaestus, his answer to the crafting of the giant races by the titans.  Many of them are born lame like their patron, or wear one extra-heavy boot to honor his slow tread.  Adventurers on their way to the Holy Land as part of the Crusades might pay a call to these slag giants to commission badly needed weapons and armor for the war effort.  Adventurers fighting on the side of Saladin might try to persuade the giants to join them instead, or work to stir up the titan-born giants and Echidna’s aberrant brood against the slag giants and their Crusader patrons.

That last seed is also a tiny nod to the hephaeston from D&D’s Creature Catalogue, which I wrote a little love letter to last winter.

Here’s last night’s radio show!  I had a lot of fun with this one—even the SNAFUs had me smiling.  New Chvrches, that Cure/Commodores mashup, *tons* of new girlpunk and more.  Stream and download it!

(If the feed skips, Save As an mp3 and listen from your desktop.  Link good through Monday, 8/10, at midnight.)