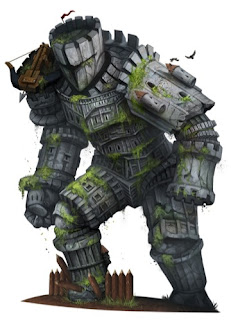 (Image by Damien Mammoliti comes from the Paizo blog and is © Paizo Publishing.)

A stone colossus is the dream of every master siege breaker: a castle that fights back.  Able to morph from a small keep into a 70-foot-tall construct (and better yet, one that fires ballista bolts the way Destro fires wrist rockets), a stone colossus is the closest most adventuring parties will ever get to fighting—or piloting—Metroplex.

Adventurers are on the trail of the Dancing Hut of Baba Yaga.  Following the outlandish artifact seems impossible, until they discover the hearthstone that will turn an isolated keep into a stone colossus that can keep up with the chicken-legged cottage.  And given that the colossus has the face of a fox, maybe that’s what its purpose was all along.

The Iathavos is coming….and if it reaches the Fountain of Souls in the City of the Risen, it may permanently dam the spiritual river that mortal souls ride to the afterlife.  Adventurers have little hope of stopping the mighty qlippoth, but if they can assemble the components to waken the stone keep that serves as Risen’s postern gate, they just might pull off a miracle.  Assuming, of course, no one beats them to the construct first…

On the world of Quake, lands move almost as frequently as cicadas spawn—every dozen or so years a tapped ley line will swell the borders of a magocracy, a plain will phase out of the Dreamtime and form a vast veldt, and an island might sink beneath the waves or rise into the sky.  Small wonder, then, that the subterranean realms are just as given to change.  Unable to burrow like the dwarves or glide through stone like the xorns, dark elves migrate during the shifts, following the path carved by Annelis the Burrower.  Most ride in great stone-wheeled barges or gem-powered skiffs, but some maverick dark elf lords command great walking colossi they can pilot along the Worm God’s trail and then fortify when their travels end.

I think I’ve mentioned before that I own all of two books for 4e D&D, Underdark being one of them.  I actually really dug that book’s vision of a constantly shifting Underdark ruled by an ever-crawling maimed god, hence the above adventure seed (along with nods to Roger E. Moore’s creation of Urdlen the Crawler Below).  For whatever reason though, 4e books didn't work for me, and I’ve barely cracked either Underdark or The Plane Above: Secrets of the Astral Sea since then.  Which is really too bad, because I love fluff for any system—hell, I buy old White Dwarf issues just for kicks—but something about 4e’s writing style and layout/design just never clicked.