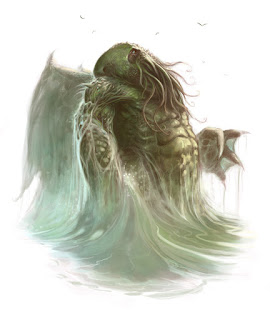 I already shot my pseudopod re: pseudogod Cthulhu himself back around Halloween.  (And as far as I can tell it’s my most popular post, bar none.)  So I don’t have all that much to add about his star-spawn, especially since their entry in the Bestiary 4 is so comprehensive.  For all practical purposes, they look the same as their dark high priest, though they only top out at 30 feet high.  (As a bonus, their elastic limbs can also stretch 30 feet in combat—hope you have some polearms handy!  That’s assuming their telepathic minds didn’t already knock you out in your dreams last night.)  We know they warred with the elder things in the distant past and have manipulated the mi-go to their purposes, so if either of those two baddies have shown up in your game, you have a reason to tie in the star-spawn.  They also move and plan long-term—this is a race happy to use its immortality flying between planets with only the limited starflight ability—so PCs will likely never know if their interference saved the day or merely set back the spawn’s goals by a millennium or two.

But let’s face it…really, the reason you have the star-spawn of Cthulhu in your game is because it’s only a CR 20 creature.  I feel like I need sarcasm quotes every time I say “only,” but you get my point.  In other words, it’s a Cthulhu proxy most parties can face and possibly even survive against without resorting to mythic ranks and divine intervention.  Maybe the spawn is a servitor of Cthulhu…or maybe it’s actually an aspect of him intruding into the world.  (D&D 3.0/3.5 did similar things with aspects of the various demon lords.)  If the PCs win, they’ve saved the world (for a little while at least), and if they lose, they’ve still got a chance to pick themselves up, dust themselves off, and rally allies for another strike.  That makes fighting the star-spawn an epic task, but not an impossible one—perfect for heroic fantasy role-playing.

Best of all, if they have too easy a time of it, you don’t even have to sweat.  Just imagine the look on your players’ faces when you announce that, congratulations, the noise of their battle with the star-spawn has awakened 1d6 of his friends…

Adventures have fought the watery servants of Dagon their entire career.  They’ve battled cultists in sunken canals, defeated marsh giants in Drowned Ulm, took on mer-form to battle inside the gut of a ceratioidi temple-fish, and scalped a fiendish brine dragon.  Now as the demon lord’s temple city falls around them, they consider their work well and truly done…until the city is borne aloft on a cloud of noxious gases and coral sails.  And as the city ascends into space, the adventurers meet the Navigators—three star-spawn who bow before the same power Dagon does: Great Cthulhu.

Cthulhu is dead.  In fact, he never even existed.  The First Gods literally unmade a chunk of creation itself to remove the Great Old One from this reality, then shed the parts of themselves that knew of him, birthing the New Gods from their very own selves rather than keep even mere knowledge of the abomination.  But dreams of Cthulhu survived and birthed a star-spawn…or maybe a star-spawn survived and birthed the dream of Cthulhu.  The point is, books with Cthulhu’s name have appeared without anyone writing them.  Cultists have appeared worshipping a god who is not a god but nonetheless grants them spells.  And somewhere on the Demiplane of Dreams a star-spawn of Cthulhu sleeps, and if he is not slain before his dreams are finished, Cthulhu will be dreamed into full existence once more.

When even devils get nervous, you know something’s wrong.  And when a half-fiend kasatha arms dealer from Dis closes up shop and takes adventurers out for drinks—and actually volunteers to pay—on auction day at one of the biggest salvage planets in the Known Spheres, you know wrong isn’t even the half of it.  “It’s those fungus bugs, the mi-go,” he says.  “I found out where they’ve been getting their gear from.  Well, the idea-seeds for their gear.  Only it’s not a ‘where’…not even on a planar level.  It’s another dimension—you might say it’s a ‘when’ and a ‘what if?’ and a ‘once was.’  And it’s a ‘who’…this thing called—”  And that’s the last thing he says before the shoggoth bomb goes off and he is devoured.

The note count was up around 90 for yesterday’s post when I discovered some fluke of the mouse had linked to the wrong radio show.  *headdesk*  Sigh.  So if you tuned in and got my big anniversary show from last February I apologize—it was a fun show, but not exactly what I do week to week.  You were supposed to get this.  (BTW, yesterday’s link is now fixed on Tumblr; I can't fix it on Blogger but I posted the correct link in the comments.)