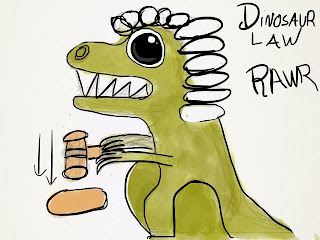 Image courtesy of artisticlicensetokill; see below.

These are the big ones: the two dinosaurs everyone knows (especially since they’re so often pictured dueling each other).  If dinosaurs exist in your world, it’s not a question of if the party ranger is going to want one of these as an animal companion; it’s when.

Meanwhile, though, let’s give you some excuses to sic them on your players.

The kasatha matadors of Barsca laugh at the notion of bullfighting.  These nimble, four-armed jumpers instead test their skills against enraged triceratopses.  Criminals and outsiders who wish an audience with the Saber Chief are often expected to take part as picadors.

A kapre wishes to drive adventurers away from the as-yet-unspoiled Rainbow Falls.  The wooden-faced plant entity blows smoke on the adventurers and exposes them to its confounding aura, then drives a tyrannosaurus into their midst to scatter them.

After being awakened, a tyrannosaurus uses its newfound intelligence to ensure a more reliable food supply through banditry, extortion, and mercenary work.  Its most recent contract is with Crescent Mining, a company of wereboars currently gutting the jungle east of Portage Lagoon.