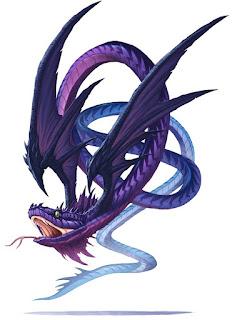 (Illustration by Dave Allsop comes from the PathfinderWiki and is © Paizo Publishing.)

I’m a big fan of Dave Allsop’s art—he did the Bestiary’s woeful mite and the amazing papinijuwari I was so excited about a few months ago—so I’m a little bummed that his peuchen, while beautiful, doesn’t capture the scale of the beast.  What he’s painted looks like an exotic species you’d see on display in a fantasy reptile house or curled around the arm of some sorceress.  But it’s actually a roughly human-sized (Medium) monster that punches in at a mighty CR 10.

And that, in a nutshell, is why I like the peuchen: It’s a pretty good dragon substitute for low-level campaigns.

But let’s back up.  The peuchen is a cryptid from Andean mythology, especially Chile and Argentina—likely a mashup of the boa and the vampire bat—that is a feared shapeshifter who drains the blood of livestock and lone shepherds. Pathfinder’s version follows that outline almost exactly (right down to bleed and blood drain abilities, as well as the ability to cast hold person and vampiric touch).

I’m always looking for good non-European monsters I can point GMs to, and the peuchen definitely checks that box.  (Which is awesome, as South America is probably our least-represented continent in terms of Bestiary monsters.  Even Antarctica has a better selection once you start throwing in Lovecraft, John Carpenter’s The Thing, Hollow Earth tales and other pulp inspirations.).  Then again, if you’re a Euro diehard, the peuchen reskinned could make a perfectly acceptable version of Fáfnir the dragon.  I’m also always looking for ways to tell bring more intimate, narrative and folktale-inspired gaming into Pathfinder.  And I can totally see a slow-moving, low-XP campaign where a PC’s parent’s death hangs over the campaign…with the peuchen teased as the culprit all along but finally revealed somewhere around Level 6 or 7, just as the players are really coming into their full powers.

But if you want straight-up hack & slash…well, Camazotz is about the most badass god/devil/demon (depending on your game world) out there.  Someone’s got to clean out his creepy jungle temple superdungeon…and guess what’s the perfect monster to fight on Level 10?

Nutmeg’s value to spice traders isn’t just from its rarity and taste—it’s also dangerous to harvest.  Peuchens delight in polishing their scales with the crushed aromatic seeds of the nutmeg tree.  Harvesters in the Bluewater Isles need adventurers who will guard their crews from the cunning winged snakes.

The fey of the Bier of Bone—bloodthirsty pixies, tooth fairies, quicklings, redcaps, and worse—all serve the mad leanan sidhe Umlar.  Her prize pet is a peuchen the blue of a bird of paradise.  Recently she has been distracted by the charms of a larabay (who secretly plots to steal her throne), leaving the peuchen as the main guardian of her ivory hoard.

Years ago, a silver-tongued drover talked his ways out of the jaws of a peuchen by offering to deliver livestock the likes of which the winged snaked had never tasted.  Intrigued, the peuchen agreed, and was rewarded with Huwari beef from the Olfshires—a kind of cattle newly brought by Northern colonists.  Desiring more such delicacies, the peuchen and the drover began trading Northern cattle for alpacas, llamas, and other livestock. Today the drover is the most powerful beef importer in the thriving colony Sor Pelag, with the peuchen as his silent partner—and occasional enforcer.  When a new source of flesh—glowing, duergar-raised deep oxen—threatens the pair’s monopoly, they turn to murder to keep their balance sheets in the black.

The history of nutmeg is actually super interesting.  Nutmeg is also one of the reasons that, while Pepsi always does better in blind taste tests, Coke is more popular in reality—the nutmeg in a Coke Classic sets off more flavor sensors and yields a more complex, richer experience over the course of the entire can.  (At least according to some New Yorker article I read years ago.)

I keep waiting for my day job to hand my some kind of nutmeg-related project, but so far I’ve only played around with turmeric and bay leaves.

Looking for the penguin?  We covered that way back here.