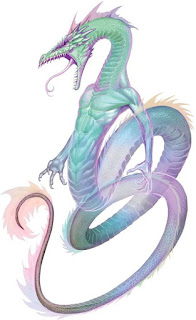 (Illustration by Roberto Pitturru comes from the PathfinderWiki and is © Paizo Publishing.)

The serpentine proteans are chaos incarnate—so much so that they can change their shape, their vital organs shift around constantly, they can just regrow new sensory organs, they are in constant flight, they are always under the effects of a freedom of movement spell, and many of them cause warpwaves that ripple through and twist reality itself.  But at least they’re bound by some basic laws of corporeal existenoh God there’s an incorporeal version isn’t there?

So, welcome to the pelagastr!  And it gets worse, because these creatures, while not being part of material existence, delight in it—the Material Plane in particular—dipping their limbs into reality to smack adventurers around or magic jar-ing themselves into humanoids to wear their skins for a while, just for kicks.  They are natural spies and investigators, and unlike other proteans seem to originate directly from the Maelstrom itself, rather than promotion/evolution through the protean caste structure.  So even for creatures of chaos, pelagastrs are…chaotic.

If you’re looking for more on pelagastrs, definitely check out Pathfinder Adventure Path #99: Dance of the Damned, which has room for far more lore (as well as teasing a possible pelagastr master) than the Bestiary 6 write-up.  But in the meantime, here are some adventure hooks to get you started:

Efreet loathe pelagastrs for the disorder the cause—and the plans they ruin with their incessant spying and possession.  Five maliks known as the Fist organize a pelagastr hunt every year.  The prize, a unique statue carved of ruby, is worth a fortune in and of itself, or it may be exchanged for a favor from one of the five fearsome lords.

The Anchored Isles are a chain (literally, thanks to adamantine fetters of extreme size and age) of floating earthbergs hovering where the Planes of Earth and Chaos intersect the Plane of Air. Here the artists and aesthetes from the Circum Sensoria allow pelagastrs to ride their bodies, unlocking the doors of perception for both parties.  But when a clique of pelagastrs begins a new fad of riding mortals into the experience of death, adventures must step in to separate the sense-mad participants.

The Snallygaster & The Pelagastr isn’t a sign you’d see above most public houses—but then again, Cardumond, with its cosmopolitan society and no less than three magic colleges, is no ordinary city.  And things are about to get even more unusual for the tavern.   Earlier this week, a pelagastr (a recent escapee from the university’s Hall of Conjuring) chanced upon the pub. Delighted by the sign outside, the pelagastr has decided that, now that he’s arrived, all that’s lacking is a snallygaster or two…and he his currently herding two giant specimens toward the tavern at this very moment.

My notes for the first draft of this post references a Snail Mail video where Lindsey name-checks my radio station—the link to which has long since vanished.  Oh, and it references me not doing my show the night before…because of snow.