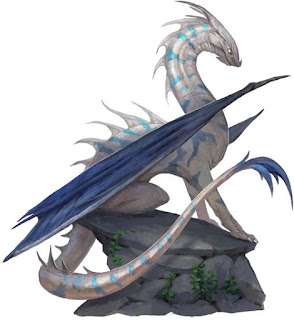 (Illustration by Leesha Hannigan comes from the PathfinderWiki and is © Paizo Publishing.)

It was pretty much inevitable that we’d get planar dragons.  (Honestly, I expected them sooner than Bestiary 6, but outer and esoteric dragons arrived instead, a sign of Pathfinder’s pulp sci-fi/horror obsession).

What’s not inevitable is their naming convention.  It would have been really easy to just slap planar monikers like “Abyssal” or “Maelstrom” on top of these dragons.  Instead, we got something far more interesting: names that seem more conceptual, more distilled, that tap into essential aspects of those planes—apocalypse, bliss, crypt, edict, havoc, infernal, paradise, rift.  You feel like each dragon species could have its own planar layer or demiplane based on its specific descriptor.  (Elysium probably has many fields; Havoc feels like a specific one.)  It’s not a huge difference, but it’s a subtle and meaningful one. More importantly, it’s a surprise from the authors, and this late in the Bestiary life cycle surprises are to be treasured.

So…the paradise dragon.  Like all planar dragons, it manifests a chunk of its home plane around itself (a nice touch that feels very video-gamey or anime but still awesome).  The paradise dragon’s specific special abilities also pack a lot of heavenly flavor.  The text indicates that they create holy sanctums of light and harmony to shield their followers, and that extends to their abilities, which aid, heal, resurrect, rebound, bull rush, or banish as needed, allowing them to reshape even the battlefield to their liking.

Like archons, these dragons are pretty much the ne plus ultra of right and good…but for adventure design purposes, there’s always that one bad apple more concerned with his particular rightness than the public goodness.  Also, in the single sentence of descriptive text we get, B6 mentions these dragons attract followers…and what policies or actions a planar dragon deems necessary to protect its followers may not jibe with PCs’ plans.

The paradise dragon Pearl of Moonlight discovered the long-hidden prison lair of Alefbetraxus, an elder wyrm.  Overawed and a little infatuated by his age and grandeur, Pearl seeks to free the primordial dragon, and she will brook no interference.  Unfortunately, Alefbetraxus is still guided by his instinctual drives, one of which (in fact, the reason for his imprisonment) is to eradicate any and all forms of elemental planar pollution.  Poor Pearl has no inkling what he might do to the world she guards, where one in twenty humans has geniekin blood.

Paradise dragons are discouraged from dwelling too long on the Material Plane, as cults inevitably form around them.  The empyreal lord Enoch the Admonisher, Scourge of Pride, makes it his business to test the character of these paradise dragons, often using powerful adventurers as cat’s-paws.

Since the Shattering, there has been no single lawful good plane—a triumph of existential undermining sponsored by the daemons of the Shroud.  What remains are scattered islands of conceptual reality—the Seven-and-Seventy Heavens—each one held together and defended only by the iron will and adamantine claws of a paradise dragon and its followers.  (This includes whichever archons haven't yet fled the multiverse in shame.)

Not all the planar dragons appear in Bestiary 6; some show up in Pathfinder Adventure Path issues.  I think at time of writing we’re still missing one from the Maelstrom (PathfinderWiki indicates it’s the tumult dragon).  (Or maybe that plane rejects having a designated dragon species as being too orderly…or maybe doesn’t need one, thanks to the protean race…)

Speaking of the dragons we got (or didn’t)…we were probably never going to get all of the abomination, humour, mineral, thaumaturgic, sin, and virtue dragons that Mike McArtor teased all the way back in Pathfinder #4: Fortress of the Stone Giants.  But I fervently wish we had gotten some of them, and to this day I love the weirder, wilder Golarion they suggested.  If you ever get the chance to dig up the early Pathfinder issues—especially those explosive first 18 issues—do it!