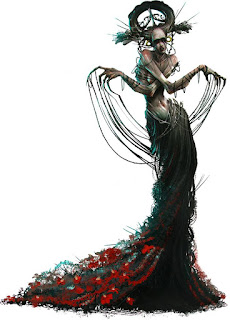 (Illustration by Jose Parodi comes from the Pathfinder Facebook page and is © Paizo Publishing.)

“Pakalchis feed on the fear and insecurity of failing relationships,” says Bestiary 5.  And if you’ve ever been in a failing relationship, that’s pretty much all you need to know to convince you that these sahkils are the absolute worst monsters in B5—end of story, full stop, done.

And that’s even before you take into account that they can skip between the Material and Ethereal Planes (never a good thing) as a move action (even worse)…dominate you into giving into your worst instincts, fears, and insecurities and sabotage your love…and then strangle, poison, or pierce you to death when it’s all over and you’re no longer amusing to toy with.  Remember how mad Iago made you when you read Othello in high school?  This is Iago with game stats and semi-immortality.  She may be CR 9 on the page, but she’s CR 29 against your heart.

Also, one last note to underscore why pakalchis are the absolute worst: they feed on “failing relationships.”  Not troubled, not star-crossed, not tumultuous—failing.  (And since sahkils are former psychopomps, from a lore/flavor perspective it’s not unreasonable to assume that they have at least a little foresight/precognition about such matters.).  In other words, these relationships were already doomed.  The hurt was already there.  Pakalchis make it vastly worse so as to feed on the couple’s misery…but if you slay a pakalchi, that’s not going to lift the dark clouds over its victims and make flowers spring up in their footsteps.  It just means the relationship is likely going to flounder and fail anyway…and when the end comes, there won’t even be a monster to blame.

Young men in town have been disappearing—often after violent quarrels that leave their sweethearts heartbroken (and too often sobbing and bruised).  Certain signs—vines in unlikely places, bits of clothing caught on thorns, and trails of flower petals—suggest a nymph or some other fey influence.  But the true culprit is a pakalchi whose domain includes a thorny thicket in this world and a grasping, hungry forest on the Ethereal Plane.

Emika and Bez-Sha are twins—budded in the same instant from the same outcropping of direstone in the Cradle of Bones.  Though the catrina sisters were once mirror images of each other, Bez-Sha abandoned the psychopomp order to become a sahkil, gaining in power as she discarded mercy and other weaknesses.  The only hint at their kinship now is the swaying gait of their skeletal forms and the identical shade of tea roses adorning their brows.  The sisters have not spoken since Bez-Sha fled Death’s Realm, but Emika stretches her schedule and her oaths as far as they will allow to search the multiverse for news of her twin. Often this means hiring mortal adventures—sometimes with gold, sometimes with promises of future intercession in matters cosmic.

Napoleon’s occupation of Spain leads to calls for revolt throughout Mexico.  To suppress the uprisings, the Spanish colonial governments rely heavily on mercenary wizards, particularly conjurers whose summoned allies excel at breaking up demonstrations and ferreting out revolutionaries. Doing so, however, pierces the veils between this world and the next, allowing shadows, spectres, and extraplanar threats to creep through.  Recently a pakalchi managed to ooze over from the Realm of Mists.  She has taken to haunting the son of a local marqués and his betrothed, the daughter of a wealthy importer. The lovers’ misery has exacerbated tensions between the families and driven the distracted marqués to ever-harsher reprisals against his people, magnifying the fear and misery that fatten the pakalchi and her allies.

The original image of La Calavera Catrina that inspired Pathfinder’s catrina psychopomp and possibly the pakalchi actually dates from a century later than the Mexican War of Independence: 1910, rather than 1810.  But today the images of a beautiful woman and/or a friendly skeleton wearing a flower crown is so tied to Mexico I couldn’t resist playing with history a little for that third adventure seed.  Mashing up wizards and Napoleon is, of course, also a big nod toward Jonathan Strange & Mr Norrell.