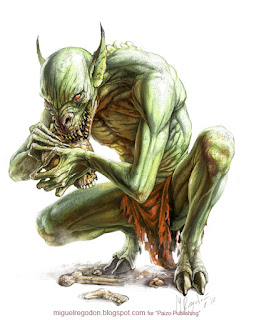 (Illustration by Miguel Regodón Harkness comes from the artist’s DeviantArt page and is © Paizo Publishing.)

There’s no way I can do justice to Leng ghouls here.  For that, you of course need to turn to the work of H. P. Lovecraft, particularly The Dream-Quest of Unknown Kadath.  For a quicker overview of Leng and how it fits into Pathfinder, Greg A. Vaughan’s “Leng: The Terror Beyond Dreams” has a gazetteer of that nightmare realm, courtesy of Pathfinder Adventure Path #65: Into the Nightmare Rift.

Here, then, is the short-short version: Leng ghouls are more bestial in appearance than other ghouls, having vaguely canine faces.  They’re also substantially more powerful, weighing in at a mighty CR 10 and packing a nasty version of ghoul fever.  (Also of note: Gugs fear them.  Meanwhile, while normal ghasts are fairly close cousins of normal ghouls, Leng ghouls and the bestial Leng ghasts hate each other with a passion.)

But despite all this, what really sets these undead apart is their intellect: Leng ghouls are civilized, even erudite, with close to genius-level intelligence, all Knowledge skills treated as class skills, and the ability to cast pretty much any scroll.  These are ghouls that, when they’re not trying to devour you for dinner, might invite you to a scholarly lecture or chamber music performance.  You just have to watch out around mealtimes.  (And there’s that nasty habit they have of worshipping the Outer God Nyarlathotep…)

The key hook for GMing Leng ghouls is surprise.  There should always be a twist somewhere in the encounter.  Maybe it’s the Leng ghoul delightedly inviting them to peruse its library.  Maybe the Leng ghoul acts like their friend only to betray them at the last minute.  Maybe the PCs descend into a Leng ghoul’s wine cellar only to find themselves climbing a tower on the moon.  Maybe after too long in a Leng ghoul’s company, the PCs find themselves tainted by the touch of the Crawling Chaos, or invited to be guests of honor at a ball in Hell.  The point is, when PCs encounter a Leng ghoul the adventure should either take a sharp left turn into Weirdsville, or else kick into high gear with the pedal to the floor.  Encounters with Leng ghouls don’t have to be a melee; they might be beneficial, even friendly—but they should always lead somewhere unexpected.

Adventurers arrive at the Kingdom of Ghouls during strange times—a delegation from Leng has just arrived for the first tome.  Expecting to have to slaughter their way through waves of feral undead to reach their nemesis, the fabled Ghoul King, the party members are taken utterly aback to find themselves given tokens of protection and asked to arbitrate trade negotiations between the Kingdom of Ghouls and Leng.

Adventurers are fighting gugs underground when the arrival of a Leng ghoul terrifies the great shaggy beasts.  The ghoul invites the adventurers back to its chateau, an otherwise ordinary-looking villa built into a barren cavern.  The Leng ghoul is a charming host, and only when the adventurers try to leave (and discover the villa now sits on a cliff overlooking an oily sea against a black sky) do they discover the ghoul’s true motivation for befriending them—one that involves a moon-beast potentate, drow flagellants, and a stock market for body parts run by the mercane.

Adventurers have found a scroll they cannot translate, written in hieroglyphics that conform to no known language.  Soon they find themselves the subject of a number of assassination attempts.  A Leng ghoul wants the scroll, as it will allow him to bind a good outsider to the helm of a skyship designed to sail on human-skin wings between the stars.

For another look at the Leng ghoul, check out Daily Planescape’s take.