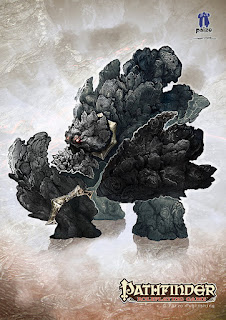 (Illustration by Ertaç Altınöz comes from the artist’s DeviantArt page and is © Paizo Publishing.)

Now this is a golem I can get behind.  (Longtime readers know that I am very skeptical of new golem types.)  Such an unreactive metal is the perfect thematic fit for the notoriously magic-resistant constructs.  Its low melting point means it’s easy to mold into useful forms.  The use of lead predates the ancient Egyptians, so you can stock them in dungeons of any age.  Finally, of course, lead is flat-out dangerous, even poisonous.  Sounds just right for a CR 10 golem.

Lead golems are notoriously hard to enchant.  Only dwarves construct them with any regularity, using them to guard trade secrets and prevent industrial espionage. After the crafting of a certain magical lens goes awry—and after much political deliberation—a beleaguered thane reluctantly sends for some adventurers. He confesses that, because of the accident, an umbral stain pollutes most of the hold’s lower levels.  What he doesn't know is that the adventurers’ cleanup efforts will be hampered by a tarnished scitalis, a colony of moulder dwarves, malfunctioning lead golems, and the ever-shifting shadowy stain itself.

An ancient lead golem knuckle-walks like an ape—and indeed, it resembles a crude gorilla.  It also shows an antipathy for elves…a strange trait, given that elves supposedly arrived on the continent of Davish only recently.  Exploring the tomb that the lead golem guards may upend the published histories of elves, apes, and men alike.

The famed alchemist Nicolas Flamel has cornered the market on lead throughout Paris.  This has caused the work of the stained glass artisans to grind to a halt, and they cry foul at Flamel turning lead into gold while their pockets remain empty.  As Paris is still reeling from Marcel’s rebellion against the Dauphin, the glassmakers are forced to hire outside agents to confront Flamel and demand restitution (or at least bring him to the bargaining table).  Adventurers who investigate his workshop find a secret warehouse guarded by tengu rogues and the beginnings of an army of lead golems.  Clearly, this is bigger than a guild war—Flamel must be stopped before any more of the things can be enchanted.