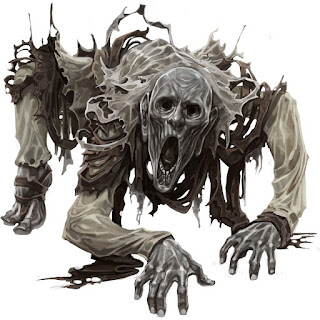 (Illustration—credited to Kent Hamilton on the Paizo Blog, but to Miguel Regodón Harkness in my printing of Bestiary 5; I believe the former is correct—comes from the Paizo Blog and is © Paizo Publishing.)

The split above hinges on your definition of “monk”—whether the monk in your imagination leans in the direction of the Christian (especially the Benedictine) archetype (in game terms, the cleric character class), or toward a more Eastern archetype à la India’s fakirs or China’s Shaolin monks (and the eponymous monk character class, obviously.)

Obviously, there’s a natural West vs. East split there.  But let’s imagine your game is cosmopolitan enough that both kinds of monks share similar faiths/heritages/backgrounds and monastic communities.  Then the question in cases of undeath is: How did they fail (and/or who failed them)?  If they died after having blasphemed, renounced their faith, or with a stain on their soul, then you get a huecuva.  If they died while violating the precepts of their order, if they failed to remain true to their training, or with a stain on their honor, then you get a kurobozu.  In other words, did they falter in faith or practice, in their dedication to the next world or this one?  The answer determines the type of undead.

Beyond that, kurobozu (also known as black monks) are ki, Wisdom, and breath-stealing menaces.  But unlike many undead who arise from misfortune, they have the (18) Wisdom, lawfulness, and presence of mind to engage very long-term schemes of revenge, even going so far as to recruit mortal allies.  The result is a revenant that can be far more effective than the usual angry spectre, wraith, or ghost in laying low the targets of its vengeance.

In Taito, travel is allowed but carefully monitored, and travelers must often stay overnight at tollhouses that double as inns while their papers are approved.  When Brother Laika died at one such tollhouse deep in debt after a drunken bender, the stain on his honor was such that he returned as a black monk.  Now kurobozu Laika visits inns across Taito in the guise of a thirsty, hooded farmer.  His preys on mendicant priests and serious debtors (those owing more than 50 gp), whose empty pouches and desperation he can smell from a spear’s throw away.

A powerful spell has put the citizens of an entire town to sleep.  What begins as a mystery for a party of adventurers becomes a race against time, as they discover a secret society of ghasts and kurobozus are unaffected by the spell and now brazenly feed on the somnolent citizens.

Adventurers arrive at a monastery just ahead of a brutal snowstorm only to find themselves trapped in a schismatic conflict.  One faction wants to continue to study in peace; the other, full of younger hotheads, believes in testing themselves through battle while demanding increased tribute from the surrounding villages.  A guard of kurobozus is responsible for much of the upheaval, having spent months visiting the leader of the violent faction in secret.  Now that the blizzard has arrived, it is a war of barricades and hallway-by-hallway battles, monk versus monk and monk versus undead, with the adventuring party caught in the middle.

For more on kurobozus—as well as some really neat info on travel restrictions during the Edo period—read on here.

If you’re looking for the koto-furunishi, it’s back here.

Twenty years ago this February—sadly I can’t tell you the exact date, as I wasn’t smart enough to tape my shows or keep good records back then—my friend George and I trudged through the snow at 2:30 AM for our very first FM radio show.  Twenty years later, I’m still DJing every week and loving every minute of it.  So last night I threw myself an anniversary party to celebrate, and we partied like it was 1997 all over again.