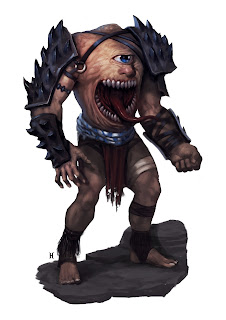 (Illustration by Nemanja Stankovic comes from the artist’s ArtStation page and is © Paizo Publishing.)

Hoo boy.  Now this is an interesting monster.

With no head and a single eye, nose, and mouth placed in the center of its chest, the kabandha is clearly a monster out of myth and fable.  (Which it is—Indian myth, to be precise.)  And I think for a lot of gaming tables, that’s where it will remain (if it’s even used at all).  The kabandha’s outlandish appearance, so monstrous and childish at the same time, limits its easy application in most game worlds.  Like Bestiary 4’s one-eyed, one-armed, one-legged fachen, this is a monster that most easily fits into your campaign’s Mount Olympus, the land of Faerie, or the kind of fable-packed island chains you find in works like the Odyssey, The Voyage of the Dawn Treader, Gulliver’s Travels, and the Earthsea novels.  Even according to Bestiary 5, you’re most likely to find a kabandha serving the will of a god or guarding a mysterious ley line.  (They even lay eggs(!) made of stone—yet another fairy-tale touch.)

But why not put them in your campaign, especially if it’s one where the gods regular intrude?  The B5 authors specifically list the kabandha as a cyclops, thus giving it a family tree and a place in the world.  The easy answer is to sequester it along with the rakshasas and the nagas in your world’s take on fantasy India…but why not in your world’s Ireland, Jotunheim, or a homebrew location all your own?  Somewhere out there is a campaign where kabandhas are as common as minotaurs, and I want to see what that looks like.

That said, while we’re on the subject of fantasy India, the original Kabandha was laboring under a curse, and in death he was returned to his original celestial form.  What happens if your PCs kill a kabandha, only to have it return (especially if proper funeral rites are observed) as a manasaputra, angel, samsaran, or some other wise and blessed creature?

An adventuring party’s bard has been given a seemingly simple task: Deliver a cask of nutmeg to Lord Malar and convince him to open up a trade route, so that the spice caravans may travel freely through his lands.  This is a tougher assignment than it seems.  First, Lord Malar is extremely partial to cinnamon; second, he challenges any minstrel he meets to a song contest of deafening proportions; finally, he is a creature the likes of which the adventuring party has never seen—a kabandha of great age and influence—and he regards his stewardship over his lands (and the ley line they contain) as a divine charge.

Some off-duty musketeers are hired as guards for a private auction.  Among the rare books and glittering heirlooms are two seemingly ordinary stone spheres.  The spheres are kabandha eggs, and the musketeers’ security measures (and hopefully, their sense of morality) will be tested when four kabandha parents come looking for their offspring.

Traveling in the Spirit World, adventurers encounter a kabandha who bars their way.  They are stunned when killing the cyclops does not silence it.  Instead it asks them to perform the proper funeral rites to honor its passing.  If they do so, the pyre hatches a rishi manu, who promises to return to their side for a future combat of their choosing.  If they ignore their responsibilities, the kabandha follows them throughout the Spirit World as a vengeful penanggalen of great power.

I think I’ve mentioned this before, but one of the weirder nuggets in the “basic” D&D anthology accessory AC10 Bestiary of Dragons and Giants was the claim that stone giants, too, laid eggs.

One day we will get a proper India-inspired setting for Pathfinder.  (Looking at BoardGameGeek’s list of such things, the closest we’ve come so far in 3.5 seems to be Mindshadows, from Green Ronin’s Mythic Vistas line.  I gave in to curiosity and literally just ordered a copy since they were cheap, but Lord knows when I’ll have time to even skim it.)

Until then, as always I highly encourage you to keep an eye out for the excellent Allen Varney D&D Hollow World module Nightstorm (and you want the physical copy because those old Hollow World hex maps are a joy).  I believe a few kits for 2e AD&D PCs (that’s archetypes for you Pathfinder fans) also occasionally tiptoed into Indian territory; they were sprinkled throughout the pages of the Complete Handbook series and Dragon Magazine.  Dragon Magazine #189 is especially worth seeking out for Michael J. Varhola’s “Rhino's Armor, Tiger's Claws,” which looks at Indian weapons.

Finally, I’ve gotten lots of fantastic reader responses to some of our recent posts.  There are too many to list here, but be sure to read what other folks are saying.