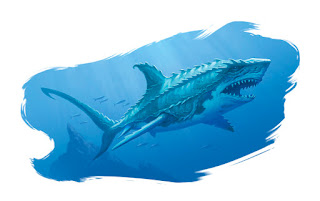 (Illustration by Jim Nelson comes from the artist’s website and is © Paizo Publishing.)

I was completely expecting the isonade to be some sort of extinct or even fictional Carcharodon megalodon wannabe, but it turns out no!—it’s a Japanese cryptid.

Jim Nelson’s approach to this monster is a barbed shark with a tail that gestures toward thresher shark proportions—which makes 100% total sense, given the monster’s tail slap attack (with reach, no less).

But the Bestiary 5 flavor text describes the isonade as “a shark protected by a crab carapace, with a tail, flanks, and pectoral fins covered in cruel hooks.”  From that description, you could easily image something more like a wobbegong shark, a camouflaged ambush predator lurking in the shallows (…although “shallows” is a relative term when you’re talking about a Gargantuan killing machine).

However you portray them, these are CR 15 creatures, a threat level practically unheard of for your standard magical beast.  The arrival of an isonade into an area is an ecosystem-alternating event, and their alternating periods of hibernation and activity (see B5) make them living myths to those who share their waters.

Losing a few sailors to a barb-tailed isonade is one thing.  Losing a king is quite another.  So when the only man who can end the war between Carraine and the Wyvernholds vanishes over the taffrail on his way to the treaty signing, it’s up to loyal Carraine adventurers to retrieve, restore, and resurrect the half-digested monarch from the belly of the isonade that ensnared him.

An enchanted door to the Sister Moon only opens when the isonades swim in the Beryl Sea.  As whales flee the gulf and the ichthyocentaur clans prepare to move, the signs all point to the monster sharks having awakened from their long sleep.

“Not even Death will claim Captain Blaze / Till Green Aggie drags her beneath the waves.”  So goes a bit of the doggerel sailors sing about Captain Blaze, the gunslinging magus who is said to have outdrawn a ferryman of Styx itself.  But it’s based on truth: the captain is immortal…but she no longer wishes to be.  So she hires adventures to do the one thing even a veiled master could not: kill her by feeding her to the isonade Green Aggie, and thus see the prophecy fulfilled.  Unfortunately, Captain Blaze’s alter ego—the wereshark she becomes every full moon as a side effect of her immortality—is less sanguine about her coming demise.