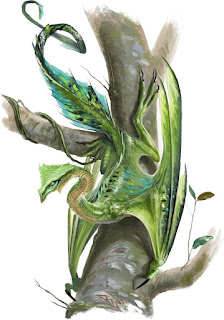 (Illustration by Ben Wootten comes from the Paizo Blog and is © Paizo Publishing.)

Drakes have been with us in the Pathfinder game since Bestiary 2, with a handful appearing in each subsequent volume.  This familiarity doesn’t exactly breed contempt—c’mon, we love dragons—but it does breed complacent expectation.  You turn to a drake page expecting a speed surge, an environmental ability or two, maybe a special attack, and blah blah blah.

That’s where art comes in.

Show me the GM who can turn to Ben Wootten’s jungle drake and not want to put it in a campaign.  That camouflaged, squirrel-splayed, iguana-toed, archaeopteryx-tailed beauty is begging to be in your game—only it doesn't have to beg, because you already put it in there, probably while I was still writing this.  Last entry I was encouraging you to look past the art as a useful way of rethinking the monster; today the art is 90% of the reason to love this monster.  Just goes to show you: Every monster entry is worth approaching with fresh eyes.

(The art does have one problem—this is a jaguar- or even horse-sized creature (that is, size Large), but it’s painted to look the size of a faerie dragon, based on the surrounding limbs and leaves.  (Maybe it’s a juvenile?)  So remember that the adult jungle drake, while small for a dragon, is still a semi-proper dragon—at least the size of the raptors in Jurassic Park.)

Beyond that?  It’s a drake optimized to work in jungles.  If you’re a tactically minded GM, you can probably wreak a lot of havoc by properly comboing the drake’s woodland stride/predatory grab/speed surge abilities into a really nasty dine-and-dash strategy (particularly against Small PCs, familiars, or pack animals).  An attack by a full rampage could leave PCs wounded, scattered, gearless, and abducted/devoured in short order.

After their dirigible is blown off-course, adventurers have only one chance to make it back to civilization: a forced march through a jungle to a bubbling spring where sailors take on water.  With the monsoon season approaching, the party has two weeks to reach the spring before the last ships depart north, despite the canyons, bugbears gnashers (see the Monster Codex), flame pillars, and worse that stand in their way.  The last challenge is a sprint across an isthmus patrolled by ravenous, grasping jungle drakes.

Divinations indicate a druid was reincarnated as a jungle drake.  Adventurers are hired to escort the druid’s master to him.  They do not realize that the master intends to skin his former pupil and use the hide to craft a particularly powerful variant cloak of the bat (see Ultimate Equipment).

The blue-skinned gnomes of the Tamuti Jungle are known for their worship of totem animals, spirits that both represent and watch over their tribe.  Among the more well-known Tamuti tribes include the Sun Bears, the Jungle Drakes, the Anoa, the Blood Orangutans, and the Oru Man, a two-headed, thin man-like cryptid.  The Jungle Drakes are notorious raiders and nomads, who not only torment their neighbors but also practice the normally taboo act of riding their totem animal into battle.