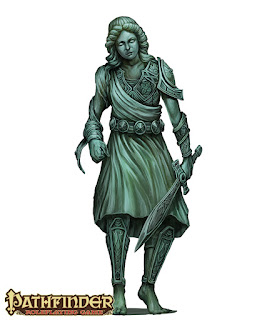 Given that I’m on record being suspicious of new golem types, it's probably weird that I’m so into other kinds of animate statues.  (No doubt it’s because living statues were a classic element of the Mentzer era-Basic Rules red box for D&D.)  And that goes double for religious statues.  (See my rather involved “Graven Guardian” post).  So celedons are right up my alley.  Based off of living statues from Greek mythology (so that’s a hard “c,” as in “cat,” for you pronunciation sticklers), the celedon is an animate statue able to defend its god’s interests, use its god’s special ability, and sing its god’s praises.

It’s interesting that, unlike most constructs, celedons aren’t created by mortals.  They're created by the gods themselves…and I find it striking that a monster meant for such low-level encounters (a single celedon is CR 1) is nevertheless directly touched by a deity.  That means adventurers who fight or even ally with a celedon could be drawing much more attention than they realize.  It's also striking that celedons are a kind of hedge against imperfect humanoids, an acknowledgement that we aren’t good enough or reliable enough to protect a deity’s most sacred sites.  Given that religion is about faith, how does it impact the faithful if they ever realize the faith in a worshipper-divine relationship only goes one way…?

Novice adventurers are meant to deliver a poisoned relic to a remote and little-used sepulcher.  They are even made to memorize the prayer that the records say is the key to pacifying the guardian celedon.  There’s only one problem: The celedon was created before the Conclave of Senna, when the liturgy was translated into spoken Common.  The prayer needs to be sung—and in the original Draconic—or the orthodox celedon will assume the adventurers are thieves or apostates and attack.

A god devoted to martial perfection takes all hardy worshippers who trust in his instruction.  His celedons are emblematic of this fact.  In order to enter his training dojos, the worshipper must trust the guardian celedon to strike him or her with the flat of its blade.  Those tough enough to only be staggered may pass (incidentally bypassing the entranceway’s alignment-triggered magic missile trap courtesy of the celedon’s prophet’s touch ability).  Those who try to dodge the test or are stunned by the blow have a dicier time, courtesy of the same trap.  Once enrolled, worshippers may find the same celedon later teaching blocks and falls, copying prayers or fencing diagrams, or leading the choir during services.

In the church of the Prismatic Lord, it is an article of faith that the god of magic descended from on high to bring the arcane arts to man.  And so the original Prismatic Lord may have…but the current prismatic lord is an ascended mortal who took up the mantle of godhood only a few centuries ago—a fact he has been very careful to obscure.  When young adventurers seem on the verge of discovering the new god’s mortal birthplace, he sends a celedon to befriend, distract, or kill them—whatever it takes to get them off the scent.  Of course, if the celedon finds out the truth about its god, its resulting (and quite explosive) crisis of faith might kill the adventurers anyway.

Adventures find a remote town peopled only by celedons.  They are all that remains of an obscure goddess’s faith in this region (her mortal adherents having packed up long ago after a terrible plague ravaged this peninsula).  The celedons are eager to have a new audience to sing the praises of their lady to. But having mortals in their midst underscores the sad puppet show that is the town’s daily life, and one or more of the celedons may become angry enough to draw blood over this fact.

Apparently I decided to write four adventures seeds…because I don’t even know why.  Also, apologies for the weekend posts, but I’m trying to work on the backlog a bit so that I can get January’s posts up to a more respectable number.

Email ThisBlogThis!Share to TwitterShare to FacebookShare to Pinterest
Labels: Construct