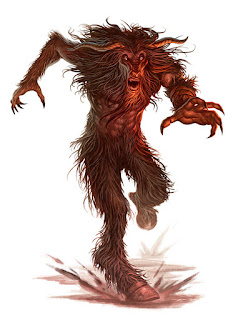 The Pathfinder Module Wardens of the Reborn Forge gave us capramaces, a race of diseased aberrant goat-men who come from Golarion’s Mana Wastes.  One of these creatures is a CR 7 problem in and of itself, but they have a tendency to herd in much greater numbers: packs of up to 11 and herds of up to 25(!).  And since one capramace’s rage call can summon every other capramace within a mile, that can easily mean the entire herd is bearing down on you in a matter of minutes.  (Did I say CR 7?  Time to recalculate this encounter’s Challenge Rating…by about +8 or +9…)

I’m also interested in the capramace because it’s a goat-man that’s not a fey or outsider.  (I have nothing compelling to say about that; I just like that it defies expectations a little.)  Golarion’s capramaces’ aberrant nature is likely the result of the mutagenic environment in which they live.  And on your world…who knows?  Subterranean radiation?  Unstable fleshwarping?  Nuclear war?  (Any Gamma World fans out there?)

If you’re someone who digs mythical monsters, the capramace is also not a bad stand-in for the Greek (and, give or take some syllable tweaks, the Serbian/Turkish/Bulgarian) kallikantzaros.  Descriptions of the kallikantzaros vary widely, but most sources agree it is a bestial trouble-maker, typically cloven-hoofed, that tends to run amok during winter religious feast days.  One could easily imagine seasonal hunger pangs driving kallikantzaroi/capramaces into civilized areas, where they are merely a nuisance at first, but then form deadly hunting packs after one is alarmed into bleating its rage call…

Believing them to be licentious, living embodiments of the cardinal sin of lust, the Church authorizes an attempt to transform satyrs into docile—and above all, abstinent—creatures.  The attempt backfires horribly.  Now the Church’s scientist-priests are dead of the waste trembles and their horrific creations, the capramaces, run wild in the streets of the Holy City-State.

A legendary chimera (see Mythical Monsters Revisited) terrorizes Thricia, punishment for that land’s neglect of the Grain Mother.  Now the braziers in her temples burn again and offerings of wheat are left in fallow fields for her birds, but still the beast comes.  Driving it off will be no picnic either.  The sea route to the chimera’s lofty perch passes the lair of one of the Grain Mother’s other aberrant daughters, a scylla.  And the land route is guarded by troublesome fey and hooting, bleating herds of capramaces that attack all but other goat-creatures and the local tengu shepherds.

Beggars are vanishing off the streets.  Farmers bring their wares to market and never come home.  The ratfolk, always the first to know of trouble, have fled the city.  And then the culprits behind the disappearances—morlocks—come boiling out of the sewers and into the streets.  They are being chased by flocks of cloakers, hordes of terrifying, goat-like aberrations, and worse.  These strange creatures (the capramaces in particular) are following instincts buried deep in their very essence long ago: the mark of their grande dame, the Outer God Shub-Niggurath.  The Black Goat of the Woods with a Thousand Young is calling her children to rise up at last.

Seriously, how terrifying would the Darklands/Underdark/Deepearth be if capramaces were the default monster instead of orcs and goblins?

Is Wardens of the Reborn Forge seriously already over two years old?  I swear it came out, like, yesterday.