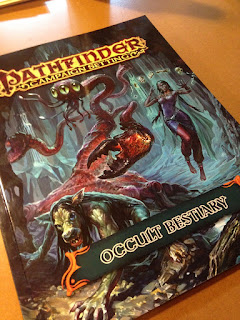 Aaaaannnddd we’re back!  Yikes.  Sorry about that unexpected vacation.  It took me as much by surprise as it took you.

Thanks to all of you rebloggers who have kept the flame alive, most especially dungeoninspiration, who has gone above and beyond these last few days.  Cheers, everybody!

So…the yithian elder.  Occult Bestiary’s cover g—errr, entity.  This is the CR 13 upgrade to the base model monster from Bestiary 3.  Although really, yithian elders are closer in spirit (and stat block) to the Great Race of Yith from Lovecraft’s stories, for the simple reason that (given proper prep time) they can actually fling their minds through pretty much all of time and space, not just to creatures in telepathy range.  They also have an array of psychic powers for intelligence gathering and defense, and lightning guns that deal more d12s of damage than you’ve ever held in your hands at one time.

So when you face yithian elders, you’re facing the real deal—alien scientists and artists who hop from planet and eon in pursuit of knowledge, experience, and especially survival.  Which means you might be taking a mental vacation on another planet while a yithian rides your body…or you might be defending your own planet from a yithian invasion should they decide their need outweighs yours.

Adventurers wake in strange bodies, their minds flung far into the future and possibly across space.  Horrible pyramid-shaped attendants patiently explain that their minds have been swapped with yithians, and they are in a hospice for the safety of themselves and their hosts.  Assuming the adventurers don’t immediately stage a jailbreak—an adventure all its own in their foreign bodies—they have a chance to learn about the strange world and culture in which they find themselves.  Unfortunately, they currently reside in the bodies of academic and political dissidents (as these spheres are pretty much one and the same to this scientist race), and the dominant faction has decided to take advantage of their rivals’ mental absence.  The establishment yithian elders storm the hospice and attempt to see the adventurers, seeking to put them through a show trial and have them executed before the dissidents return to themselves.

Adventurers find themselves at an auction for a planetoid shard.  Among the bidders are a pair of yithian elders who propose establishing an observation platform on the shard.  No matter what the outcome of the auction, the yithian elders intend to mentally possess or capture all of the auction participants for further study.  The adventuring party’s main rival intends to use his time in a yithian elder body to reduce the adventurers to lightning-charred ash.

Yithians were originally a reptilian people before the great mind migration that gave them their present shape.  The remnants and outcasts they left behind—those few yithians that survived decimation by flying polyps—evolved into the serpentfolk and xulgath races, whose empires rose and fell to slumber and barbarism in their turns.  Longing to return to the world and the bodies of their birth, the yithians are now back…and they are horrified at what the races descendants have become.  Below the depths of the earth yithian elders are engaged in the campaign of extermination and reverse genetic engineering, attempting to remold the scaled races into proper host vessels. Needless to say, the serpentfolk, xulgaths, and troglodytes are not submitting quietly.

And with that…WE’VE FINISHED OUR SECOND TRIP THROUGH THE ALPHABET!  And it only took 16 months this time, instead of three years!  How cool is that?

But don’t worry, we’ve still got plenty of Occult Bestiary monsters to keep us busy for Round 3.  See you later (today hopefully, but definitely by this weekend) for the alter ego.