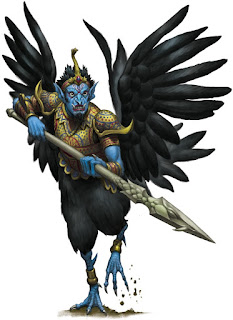 (Image by Jason Juta comes from the Paizo Blog and is © Paizo Publishing.)

The vayuphak is one of those “If you use only one monster from Book X, use this one” monsters.  Even if you don’t care about psychic monsters, this asura deserves a look.

A) It’s a monster of Thai origin—cool!  (Though my Googling has found me only one reference, on a royal barge.  If you can find out more, definitely shoot us a comment.)  B) It’s got such an instantly iconic look: blue skin, black feathers, bird feet, elaborate gilt armor contrasting with bestial tusks, and of course a wicked spear.  And C)…

There’s something that happens in certain works of fantasy.  Especially in novels, but in movies as well—NeverEnding Story and The Black Cauldron come to mind.  It’s that moment where the heroes are too late or have royally effed up.  They get to the Important Place, but it is already ruined, and the Enemy has moved on.

Or rather, mostly moved on.  Because in the most truly brutal of these fictions, the Enemy (or sometimes just the uncaring universe) leaves someone behind to gloat.  To mock the hapless heroes.  To be seen literally pissing in the ashes.

That’s what the vayuphak is.

And (off the top of my head, at least) there’s no one great default candidate for doing that in the Bestiary books.  Even the other vulture-esque creatures don’t help: harpies have gotten too sexy; succubi are all about the foreplay, not the afterglow; vrocks like ruining, not ruins.  None do precisely what the vayuphak does, which is to laugh at the PCs’ pain and make sure what is ruined stays ruined.  They’ve even got an enveloping winds ability to make sure no one plugs them with a crossbow quarrel mid-gloat.  And with an at-will teleport, good luck landing a killing blow.  This monster has seen heroes like your PCs come and go, and even if it is driven and the defiled site reconsecrated, it knows it has done its work.  The vayuphak revels in the fact that what is broken cannot always be mended…and it is confident that it will eventually micturate on the PCs’ bones as well.

Young adventurers have made names for themselves as demon hunters.  Granted, that was only some tiefling toughs, a quasit, and some dretches—but still, bona fide demons.  When they are sought out by a parish priest to stop the desecration of an isolated shrine, they take the job immediately.  But when they arrive, they find the shrine long despoiled, as well as a corpse that looks identical to the parish priest who hired them.  Even as they attempt to work through their confusion, they find themselves mocked—and then attacked—by outlandish blue bird-men.  After the unsatisfactory battle, a traveling monk (bearing a bound, very resentful raktavarna) informs them that the bird-men were asuras, fiends rarely seen in these lands of angels and demons, that the monk has been tracking.  Clearly, something is going on…but what?

Gillmen have discovered a lost city—not one of their race’s great lost metropolises, but a settlement famous for herb lore and enchanted clay vessels.  Vayuphaks guard the city, though—even now they still manage to find new crockery to shatter—and the young gillmen don’t have the martial skill to tackle flying foes.  A cut of the discovery will go to the mercenaries who aid them.

The original cursed artifact that caused the birth of the vayuphak race does exist.  It is a gem-encrusted barge capable of flight between planes, and the vayuphak progenitor still sleeps aboard.  Claiming the barge will not be easy, even if adventurers can somehow move the slumbering fiend, for it is well guarded by a calikang (see the Inner Sea World Guide) and an Advanced vayuphak easily as large as its six-armed companion.

Speaking of the Paizo Blog, apparently the first printing of the Advanced Class Guide had some issues…?  (I haven’t played with that book, so that news missed me.)  Details on the fix and the second printing are here.  Also hella free swag.  Have a good weekend!