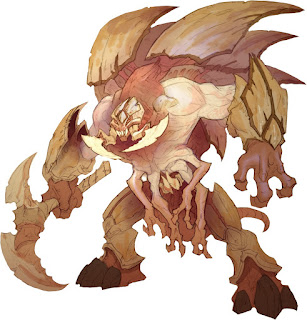 (Image by Rayph Beisner comes from the Paizo Blog and is © Paizo Publishing.)

When we were looking at the kasatha, I made it a point to highlight ways that the kasatha was not simply Pathfinder’s thri-kreen.  That said, perhaps I was doth-protesting a bit too much.  Because when I was first browsing the new sample races in the Advanced Race Guide…well, it was hard not to think, “This is how you do Dark Sun in Pathfinder.”  Not because of the kasatha, but because of the trox.  Because once you got past the blasted landscape, sorcerer-kings, defiling and preserving magic, psionics, half-giants, and brutal reconceptualizations of the core races…Dark Sun had a lot of big bugs.

And trox are big bugs indeed.  (With big warhammers to boot.)

Of course, once trox showed up in Bestiary 4, we had a better sense of where/what roles Pathfinder intended for trox—deep underground, escapees from duergar slavery, grappling masters prone to frenzy.  That makes sense.

But if you want to put them on a harsh desert world to fight in the baking sands of a gladiatorial arena, I’m not going to stop you.

Speaking of which, here are a few other ways to approach trox:

A disowned son of a viscount intends to win back his title and his family’s fortune.  No one in the county will back him—the few fools who initially flocked to his banner were executed for treason (while he rabbited).  Now he is back for another try, only this time he has brought an army of bug-monsters with him.  It turns out the slavery-hating trox have lived secretly in the highlands for years.  They believe they are supporting a freedom fighter, and only extremely persuasive adventurers can convince them of their error.

Having helped them escape from bondage, a couatl and his adventurer allies lead his Chosen People to the home he has chosen for them: a sheltered mountain valley.  Only when they arrive, they discover the valley is occupied by trox.  The couatl assumed that his adventuring friends could lead the people in exterminating the bugs, but they are all taken aback to discover the bugs are intelligent.  Torn between his promise to his people and his desire to do good regardless of the cost, the couatl heads to the heavens to seek out the patron god of the trox (if one exists).  Until he returns, his adventurer friends must keep the peace between the two sides—or make preparations to win the war, should it break out.

The seas of Blight are acidic, courtesy of acid rain that buckets from angry skies.  The resinous byproduct of trox construction seems impervious to the sizzling seas, however, and that means trox mounds are sought-after real estate for coastal and island nations.  As trox burrow deeper into the earth and build toward the sky, they give over the middle layers of their giant mounds to other races, who scrabble and fight for space to farm and dwell in.  The trox never let anyone forget who owns the mounds, though, making them the default law and order—and the aristocracy—within sight of the deadly water.

Hey thirteenfunbreaker, I told you we’d get to the trox!

If you’re looking for the trapper, we covered it back here.

With all the excitement last week, I never got around to posting last week’s radio show!  The link is only good until tonight (Monday, 9/21) at midnight, so if you want it (or even if you’re just curious) the time to stream/download it is now.  Featuring new Yacht and new Thunderbitch (thanks to Melissa of WNRN for pointing those my way), and celebrating 10 years of Clap Your Hands Say Yeah’s self-titled record and 20 years of Blur’s The Great Escape.  Whether you’re Team Claret or Team Beaujolais, there’s a song for you right here.

Edit: Sorry for the tardiness on this one.  Hoping to get back on schedule sometime this week courtesy of a long flight to San Fran.