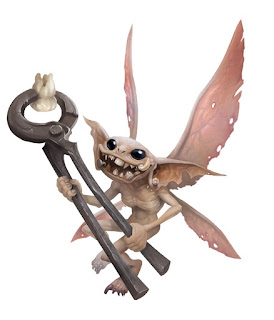 (Image by Damien Mammoliti comes from the Paizo Blog and is © Paizo Publishing.)

Edit: Sorry for the tardiness of this post.  There were Reasons™.  I didn’t want to put up a placeholder post because I like this monster too much to see it buried, and anyway the post was 90% written.  Again, sorry for the delay, and I’ll probably tackle the trox tomorrow or Sunday.

It’s probably pretty obvious by now that I love wicked fey.  I don’t mean ridiculously grimdark—I don’t need every trip into Faerie to be American McGee’s Alice—but a Brian Froud-ian wildness is a) required, and b) delightful.  So when I saw tooth fairies previewed over on the Paizo Blog, I knew I was going to be thrilled by them.  Oh sure, they flutter and tap-dance on the line of grimdark, but there’s enough whimsy to them and they’re so well statted that I’m on board all the way.

I mean, that face!  That smile!  Those teeth!  (And don't miss the paralyzing bite buried in the stat block.)  Those pliers!  The exact spell-like abilities you’d expect a tooth fairy to pull off.  And special abilities that perfectly fit the theme without being annoying in-game—yes, you’re going to lose some teeth if you’re unlucky, but it’ll be okay in the end.  Probably.  If not, you’ll have a terrible smile but a great story.

To tooth fairies, teeth are prizes and decoration.  But to other fey, they can be valuable spell components.  Even a typically harmless fey will occasionally hang on to a child’s tooth, just in case the child ever grows up into someone the fey needs to enchant.  To that end, larger fey sometimes keep tooth fairies as pets (albeit dangerous ones), binding them with strong oaths and then releasing them to collect teeth from families the fey have their eyes on.  Adventurers cunning enough to find a fey’s lair should beware cages full of tooth fairies flung like grenades, spilling the violent little brats while the larger fey escapes.

The sidhe don't ever take just one revenge when several will do.  So when bare-knuckle boxer Brampton Hodge splattered mud on a sidhe (treat as an elf aristocrat with the fey creature template) lord’s cloak, the fey made sure Brampton’s name would be just as sullied.  A set of ass’s ears left Hodge so ashamed that he failed to turn up for a fight, causing the locals to mock him as a coward.  Attempting to silence the mockery with his fists landed him in trouble with the law, and the arrest exposed his ears (and exposed him to more mockery).  When the sidhe lord visited him in jail and offered to remove the ears, the price—a boxing match with a satyr brawler of his weight class but well above his skill level—left him a laughingstock among the Fair Folk as well.  The final indignity is that the teeth the satyr knocked out of Brampton’s jaw landed in a fairy ring.  The resulting tooth fairies that sprang up (twisted and warped from being born from adult teeth) have moved into poor Brampton’s lodgings, gleefully tormenting their “father” when they’re not practicing dentistry on the rest of the town.  Brampton will do almost anything to have his life back, and will become a fast ally of whoever helps him.  To him, that means buying ale for his new friends and acting as their personal bouncer.  But his real value—which he does not even realize he possesses—is his connection to almost every important rogue and crime lord in the kingdom.  They hover around the boxing circuit like flies on a midden and regard Brampton as a mascot and friend—a fact savvy adventurers can take advantage of.

Thomas shouldn’t have “borrowed” the book from the rare books library where he did his work-study hours, but the tome—covered in drawings of fairies frolicking and wrapped in what felt like human skin—was too cool not to show his friends.  Opening the book in the rarely used chapel was a better idea—the tooth fairy that burst from the book seemed uncomfortable in the stone space (it seemed to particularly hate being glared at by the mosaic of the Virgin Mary), and fled the chapel after only ripping out two of Thomas’s molars.  Desperate to return the book and end this Labyrinth-ine nightmare, Thomas recruits his friends to help him retrieve his teeth and capture the wicked little fey.  Unfortunately, the stolen molars have sprouted more tooth fairies, and the influx of fey magic into the mundane world has caused a jack-o’-lantern to spring to life as well.  St. Michael’s Academy is about to become a very dangerous place…

By now you have no doubt recovered from spitting out your Mountain Dews yesterday [Edit: Well, two days ago now] when you realized I wrote “Pokemon ball” (and with no accent mark to boot) instead of Pokéball.  But of course, that was totally because I was channeling a centuries old-dragon, and not because I am old and lame myself.  I know what a pokemans is, honest.

(Actually I was in college for Pokémon’s glory years, so I am completely clueless.  I watched the hell out of some Digimon though.  I just wish it had been around when I needed it as an angsty 6th-grader.)

Edit: So said Reasons™ were that I got a last-minute invite to the City Paper’s Best of Baltimore party, MCed by Dan Deacon (who I finally got to meet and chat with).  But I can’t say that at the top of my post without looking like a jerk, so I’m hiding it here.