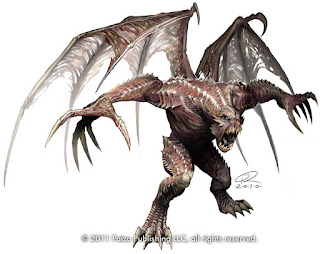 The necrocraft is clearly one of the big-deal monsters of Bestiary 4—it gets a whole two-page spread and everything.  This monster neatly straddles the line between being undead and a construct—it’s stitched together with undead body parts and animated with enough negative energy to be an undead creature, but it is clearly an unintelligent, constructed being.  (Heck, Construction Points are part of the monster description.)

But whereas, say, bone golems are boring, necrocrafts are fun!  Just pick the size/CR of the necrocraft you want, see how many Construction Points that nets you, and get to building.  The base model has wings and a savage bite.  But swap out the wings and you could give it blade fists, a constriction attack, or the ability to cannibalize its victims.  And with each change, you can imagine the thing’s appearance changes too.  Bolt on a couple of extra eyeballs (or whole heads!) for All-Around Vision.  Put a maw in the middle of its chest as an Extra Attack.  Extra Legs—duh.  You get the idea.

I’m making the necrocraft sound silly, but that’s probably my stuck-in-an-airport brain talking.  It’s clear from the B4 illustration that the necrocraft is supposed to be scary.  Those are some wings.  Claws.  Teeth.  Hate-filled eyes set in a bestial visage.  Designing a necrocraft should be fun for you the GM, but for players fighting a necrocraft should be to experience abomination, sacrilege, a wrongness so profound even ghouls might shudder as a necrocraft goes by.  When a necromancer is so vile and committed to murder that existing undead aren’t enough, that he has to stitch and rivet together his own monstrosity out of undead slaves, then you know you are dealing with someone truly beyond the pale.

Adventurers have booked passage on a ship to carry them across the Strait of Owls.  The morning they arrive just happens to be a local holiday, the Feast of the Fisherman, and there is a priest of the Morning Sun there at the docks to bless each sailing vessel as it comes in.  Just as he raises his arms to give the benediction, a crate bursts open and two necrocrafts spill out, followed by another crate and two more of the undead.  The necrocrafts were programmed to target Morning Sun clergy, and the unexpected presence of the priest on the docks unveiled the plot early.  But how many more such crates are out there waiting on either side of the Strait?

The Ghastlight Theatre puts on plays that cater to the whims of its undead audience.  Some of the playhouse’s most beloved “puppets” are necrocrafts created to portray bogeymen from fairy tales—as well as patrol the theatre during the day. One necrocraft has the long arms and scissor hands of Jemethy Snickersnack, the other the skeletal countenance and bottomless cannibal hunger of the Jawmother.

The necrocrafts of Murraine are crafst indeed, serving as mounts and war machines for the bone clerics and skull mages of Murraine’s armies.  These Gargantuan undead sport extra legs that trample and metal plates fused into a kind of barding.  The undead are also mounted with small howdahs for their handlers that can double as field altars in a pinch.  These are used for rites to bolster Murraine’s living and dead troops in battle.

It’s hard not to love any monster that lists Blade Fists and Cannibalize among its special abilities.  I also love the silliness of listing Mostly Skeletons and Mostly Zombies as attributes.  It makes me picture the necrocraft FDA warning label: “Gluten-free.  Manufactured in a facility that processes tree nuts.  Mostly zombies.”

Edit: Apologies for the lateness of this entry.  It was written in time, but an hour circling over BWI due to bad weather kept me from posting until after the midnight deadline.