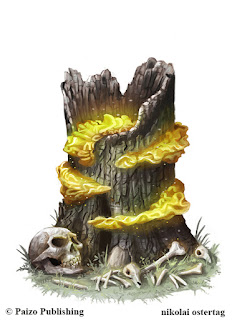 (Illustration by Nikolai Ostertag comes from the artist’s DeviantArt page and is © Paizo Publishing.)

Quite powerful (CR 11) for a plant creature (especially at size Small), a nulmind is a caterpillar-like fungus that drains minds and feeds on magic—especially psychic magic.  Worse yet, those unfortunate enough to have their intellects drained by the fungus become its puppets, luring in other prey (until they starve themselves, that is).

While nulminds have high Intelligence and Wisdom scores, these should probably be considered to represent the fungi’s mental prowess and sheer cunning—they can’t speak, don’t remember to have their puppets feed themselves, and are as happy to slurp up the minds of each other as they are their humanoid victims.  That’s not to say you can’t have a nulmind be a mental mastermind or even the main antagonist in your games…but in most cases, the nulmind’s intelligence is likely too alien to really judge on a human scale.

Speaking of alien-ness, that’s one of the interesting things about nulminds: It is strongly suggested that they are extraterrestrial (which is always a bit weird and odd in a fantasy world).  Perhaps because of this, they also have no taste for fey minds…and even seem to actively avoid them.  Two reasons for this suggest themselves—though interestingly, they're a bit contradictory.  The first is that, since nulminds are strangers to our natural world, and fey are the ultimate expression of it, fey minds must somehow be too anchored to this world for the alien nulminds to latch onto.  Alternately (and a bit paradoxically), it’s often suggested that fey were once part of an older celestial order or rough draft of existence…and as such, they just aren’t enough in this reality to be a meal for a nulmind.  Pick the explanation that works for you.

While exploring a newly discovered vault, an occultist disturbed a long-dormant nulmind.  The nulmind awoke from its torpor too late to feast upon the occultist’s mind and magic, but it tracked him back to a school for psychics that was briefly housing the scholar.  If not stopped, the nulmind will positively gorge itself on the psychic energy there, and many of its victims will be teens and children.

The antler-headed, half-fey elf king is known for having a subterranean labyrinth so deadly that even necromancers speak of it admiringly.  He is known to possess at least one nulmind, penning it in by surrounding it with undead horrors and distasteful fey guardians, including several powerful (treat as Advanced) morgodeas (vermin-loving fey from Pathfinder Adventure Path #99: Dance of the Damned).

Adventurers are collected as specimens by some sort of cosmic biologist or avid collector.  While they are prisoners on his ark, one of his other specimens, a nulmind, escapes.  The adventurers have an opportunity to make a deal with the collector: Free them, and they’ll take care of the mind-eating fungus before it mentally masticates the rest of his menagerie.

Every once in a while I remember to throw a bone to the pure dungeon delvers out there—and those second and third adventure seeds are definitely for them.  Not every campaign can be half-Pathfinder, half-Monsterhearts; sometimes you just want to kick down a door…