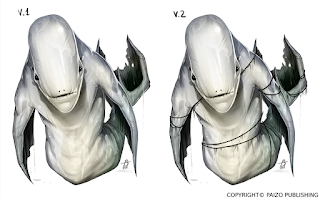 (Illustration by Alexandru Sabo comes from the artist’s DeviantArt page and is © Paizo Publishing.)

While they’re everywhere in comics and cartoons, we don’t get a lot of Colossal monstrous humanoids at the gaming table.  Things that aren’t dragons or colossi or space whales just don’t tend to get that big—even dinosaurs rarely get much past Huge.  So the ningen is neat just because it’s that big.  Like, how do you show Colossal on the battle mat?  (I’m remembering an ad for a Gargantuan blue dragon D&D mini that used a whole frozen chicken to give you an idea of scale.  I’m guessing for a Ningen you’d need a turkey.)

Reclusive and mysterious, barely having more than a suggestion of a face, ningens are creatures of the polar waters, more whale than person to most human eyes…or even more iceberg than person in some cases.  But behind that blank face lurks intelligence, the ability to converse in Aquan, and some (highly dangerous) magical control over water and ice.  A ningen can also breach and crash down on ships or icebergs for a combined brutal total of 20d6 points of cold and piercing damage to creatures and objects—damage that will sicken and stagger your characters and smash their vessels to flinders.  So maybe just because you can hunt these intelligent folk for cold-related magical ingredients, that doesn’t mean it’s wise.

A rakshasa noble believes the key to awaken his dormant magical blade is to slay “the whale that walks” with it, per an ancient scrap of text he recently unearthed.  The tiger-headed native outsider is willing to stake his fortune and risk the lives of his retinue of fiends and nagas in the frozen south, just to slake his sleeping dagger’s thirst.

The songs of ningen bards have power over ice.  Their songbergs fetch exorbitant prices in the planar art trade.  Sadly, so too do the artists themselves—when rendered for spell components—and their demise only drives up the price of their existing work.

Adventurers are too late to stop an artifact from triggering eternal winter.  Still on the trail of the now-very-active relic over a suddenly frozen ocean, they come across a ship locked in the ice…and the crew trying to defend itself from a ningen enraged that it can no longer reach deep water.

#notsobabybeluga  <—Admit it, you were all thinking it.

Ningens are cryptids from our world, but Wikipedia doesn't say much and I can't vouch for the quality of the other sites that mention them.  Also, you can’t mention reports of ningens without mentioning “whale research” vessels, and…yeah, that’s a can of worms.

In between training some fledgling DJs, I managed to work in a radio show! This week was more Canon than New or Indie, for obvious (Tom Petty) reasons.  Stream or download it now till Monday, 10/09/17, at midnight.