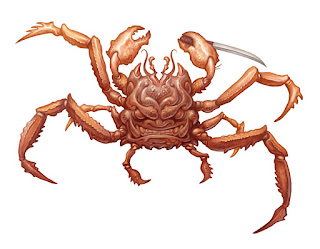 (Illustration by Jim Nelson comes from the artist’s blog and is © Paizo Publishing.)

Normally we speak of aberrations in terms of creatures from deep under the earth, who have strange physiologies, or who hail from the borders of reality or other dimensions.  (The Underdark in 2e/3.0 Forgotten Realms, for instance, was aberration central, as was anyplace that touched the Far Realms.)

And that’s where we get the heikegani from.  A samurai’s soul that can’t go to its eternal rest should become an undead or a haunt or something similar…and instead it gets trapped inside a crab zoea (great word!), doomed to spend its existence challenging interlopers from within a crustacean body.  It’s not undead, but it’s not released from its undying obsession either.  It is an aberration, full stop.

There are some nice crunchy bits in the heikegani stat block along with that amazing fluff—a heikegani can challenge opponents like a samurai, and may even try to wield a discarded dagger or knife like a katana (such a killer image!).  Also note that a heikegani can understand but not speak Common.  This likely leaves him all the more frustrated…but PCs who freely discuss tactics in front of the crustacean could be in for a nasty shock when it seemingly anticipates their every move.

All in all, the heikegani is a tragicomic figure.  If there’s one but of solace, it’s that a heikegani slain by the PCs can finally go to its rest…one hopes.

Heikegani patrol a forlorn stretch of beach.  They died defending the daughter of the shogun from hobgoblin mercenaries after both forces’ boats fetched up against the reef.  The girl still lives here, tended by awakened wolves and growing more feral by the day.  Her only connection to civilization is a tanuki who visits when he’s not too deep in his cups.  The heikegani ignore the wolves and the old drunkard but assume anyone else is an assassin.  Speaking of which, another detachment of hobgoblin mercenaries still hunts for the girl, driven by a ja noi master (Pathfinder Adventure Path #52: Forest of Spirits).

Elven samurai are especially prone to becoming heikegani, due to both their innate connection to nature and (many would argue) their overweening pride.  Sea, coral, and shoal elves thus treat all heikegani as honored brothers, especially as coral elves (along with grey and pine elves) are among those most likely to suffer this fate.

Sages claim heikegani are intelligent and even wise, but in practice the pain of their condition often clouds their judgment.  A particularly crafty (Advanced) haniver gremlin has convinced a heikegani that she is his loyal servant, and that together they are the resurrected Red Ronin and Miyoko of the tavern tales.  The haniver prods the heikegani into performing “quests” that are really just bodyguard duty for the gremlin as she pursues her true goal of seeding the town’s water supply with ningyos.

Heikegani crabs are a real thing and really do look like they have one of those Japanese masks imprinted onto the back of their shells.  Really cool.

Speaking of Eastern monsters, a little while ago someone asked me about jiang-shi/hopping vampires, and I mentioned that I didn’t have much of a background in Japanese folklore.  Another reader replied that hopping vampires were Chinese, to which I can only respond, egad, my sincere apologies.  (On the other hand, I certainly proved my point—apparently I really am terrible at Japanese (and Chinese!) folklore.)

Did I never post Tuesday’s radio show? That’s a shame, because it was a particularly excellent one.  Stream/download it here now through Monday, 12/12, at midnight for two hours of new Honeyblood, the capitalization-challenged pronoun, Kero Kero Bonito, and more.  Also, don’t be put off by the first 60 seconds—the rest of the show is neither jazzy nor Christmasy.*  Get it before it’s gone!