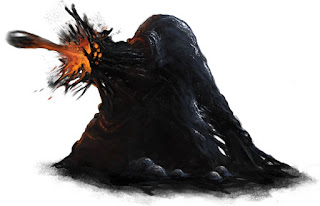 (Illustration by Dieter Miller comes from the PathfinderWiki and is © Paizo Publishing.)

It must be hard to be a high school sophomore in a Pathfinder world.  Can you imagine taking chemistry in a reality where any mistake you make has, let’s be honest, a base 50% chance of becoming an ooze?  (The other 50% probably become haunts.)

So gunpowder oozes are what happens when gunpowder and magic mix.  (Throw in some alchemy and you get admixture oozes.)  Like other oozes, gunpowder oozes seek to absorb and devour other living creatures.  Unlike other oozes, they can blast gunpowder from their bodies.  (I presume this arose as a defense mechanism or waste byproduct.  I say “arose” because “evolved” doesn’t seem very accurate for creatures that are probably pretty new to most worlds, depending on how long the society has had gunpowder.)

So all in all, gunpowder oozes are signs of progress run amok.  When magic and technology collies, sometimes it explodes…

The Titan Wall separates Newland and the Reaches—a mile-wide, monumental structure that splits the world between the realms of Man and the realms of Magic.  But along the wall itself (particularly in the dungeons that riddle its core) exist chimeric creatures that could not survive in either realm, including dracolisks, girtablilus, and the notorious gunpowder oozes.

Master Qui-Sen has been making fireworks—an act forbidden to all but the emperor’s alchemists.  He has been careful to hide his wares and dump his waste products deep in the sewer.  Unfortunately, this has led to the creation of admixture oozes with strange abilities.  Adventurers get involved when one of the admixture oozes slithers up a drainpipe and sets a granary alight in the Ratfolk Quarter.

The inhabitants of the Seventh Age know nothing of gunpowder—to them, gunpowder oozes are “flash terrors.”  But the ubiquity of flash terrors in the Seventh Age is a legacy of the Fifth Age, when gunpowder and alchemy were commonplace.  Adventurers who study gunpowder oozes may be able to reëngineer some of these lost technologies…providing the inevitables of the Sixth Age’s Great Cleansing don’t reactivate to stop them.

Email ThisBlogThis!Share to TwitterShare to FacebookShare to Pinterest
Labels: Ooze