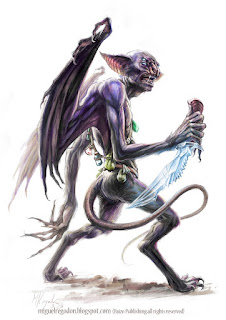 (Illustration by Miguel Regodón Harkness comes from the artist’s DeviantArt page and is © Paizo Publishing.)

Grioths, according to Bestiary 5, “inhabit rogue planets cast away from their stars.”  That seems to be an exceedingly rare ecological niche, which suggests that either a) grioths have a way of seeking out and traveling to such planets, especially during the eclipses that they love so much, or b) grioths have some foreknowledge of such calamities—or even play a hand in making sure said calamities come to pass.  Given that grioths worship the Outer God Nyarlathotep, who’s a bit of an expert in nudging societies toward apocalypse, the latter seems very likely.

Some other things to mention:

1) Grioths are only CR 1, which means they can be a useful way to expose parties to Lovecraftian or interplanetary themes very early in the campaign.

2) In The Dragon’s Demand, grioths had spell-like abilities; these have been changed to psychic magic in B5.  (Also, mentions of the grioths’ voidglass weapons were genericized down to “a strange metal.”)

3) Another quote: “The grioth race is prone to mutations.”  Translation: Go nuts with the templates and class levels.

4) Grioths hate many other alien races.  (In the Golarion setting, this means the Dominion of the Black.)  Which raises the question: What aliens are so awful that even worshippers of Lovecraft’s Outer Gods fear them?

A group of young adventurers begin their careers when an eclipse giant appears in their village and blesses them, forever marking them as destined in the eyes of the gods.  Soon after, the eclipse the giant foretold comes to pass…bringing with it an invading force of grioths from a wayward frozen planet.  The village elders tap the blessed youngsters to thwart the otherworldly creatures.

After a wizard is executed for vile crimes, some adventurers are tasked with clearing out his laboratory.  While they are there, they come across a strange bat-winged creature.  The grioth is also scouring the lab, seeking to erase all evidence of the collaboration he and the wizard shared.  The moment he sets his four eyes on the adventurers, he decides that they know too much to live.

Bartimaeus’s Bestiary of Beasts Most Baleful is widely regarded as the most fanciful—and dangerously error-ridden—manual of monsters in circulation.  Unfortunately for a certain young adventurer, Bartimaeus is also her uncle and her adventuring company’s main benefactor.  When rumors reach him of an urd sighting—urds being a race of winged kobold considered so unlikely that Bartimaeus’s publisher stripped them out of the third edition of the Bestiary—the old scribe sees a chance to restore his battered reputation.  He sends his niece and her compatriots to fetch him an urd, “alive or competently stuffed.”  Unfortunately, the bat-winged creatures are actually otherworldly grioths, with psychic abilities and strange weapons beyond even Bartimaeus’s wildest imaginings.

2e fans, that urd was for you.

One final thought: Both D&D’s Forgotten Realms (especially in 2e and 3.0/3.5) and Pathfinder’s Golarion are both exceptionally well-realized worlds that allow for a wide variety of adventure styles and settings.  (Want to fight mummies?  Vikings?  Ninjas?  Both pretty much have you covered.)  If there’s one way to quickly differentiate the two, it’s this: The Realms, thanks to Greenwood and Salvatore, teach you to fear what’s below the ground.  Golarion, thanks to Lovecraft and Jacobs, teaches you to fear the night sky.

Did any of you get that thing that’s going around?  Major congestion, bit of a fever, tiredness, general suckitude?  Because I’m on Day 9, and it is zero fun.