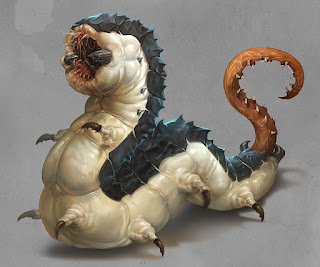 (Illustration by Damien Mammoliti comes from the artist’s DeviantArt page and is © Paizo Publishing.)

The Abyss!  What a plane.  In the Abyss, grub eats you.

Extraplanar aberrations, grimslakes feed on corpses, lesser demons, and hapless adventurers.  (The first two are common in the Abyss; the last is typically found at the gaming table.)  Grimslakes resemble giant grubs and are known for sucking the marrow out of their meals, causing excruciating Constitution drain.

Given that they're so monstrous, it’s easy to forget that grimslakes are somewhat intelligent, speak Abyssal, and have spell-like abilities.  Granted, their conversation revolves around food and the savoriness of certain screams, but it is conversation nonetheless.

“The Iron Brethren never leave a man behind.”  So goes the saying, and often enough it’s true.  Disaster strikes, though, when an Iron Brother falls in the Abyss.  The Brethren send a sortie out to retrieve his body, not realizing that it is already incubating grimslake eggs.  By the time a party of adventurers reaches the scene, the young have hatched and devoured their way through a full third of the Steel Citadel.

Adventurers are sneaking through an Abyssal dungeon when they come across two cowering quasits—who surprisingly are not invisible.  The quasits were supposed to be herding dretches, but grimslakes tunneled into their stockyard and devoured most of the demonstock.  Too cowardly to either report the disaster to their superiors or flee into the grimslakes’ tunnel, the quasits beg the adventurers to help slay the creatures.  They even promise to throw in a casting of commune as payment, free and uncorrupted…honest.

Adventurers are forced to attend a ball hosted by a diabolist.  He tests both their command of etiquette and their fortitude with a succession of dishes ranging from the profane to the truly taboo.  At last he serves the pièce de résistance: grimslake young straight from the corpse (an especially daring choice giving grimslakes’ association with the Abyss).  Due to a “misunderstanding,” the adventurers are served an adult, very much alive grimslake instead…and naturally their host and the other guests will be so shocked, verily, shocked at the mix-up that it will take them several seconds (about three rounds) to recover and come to the party’s aid.