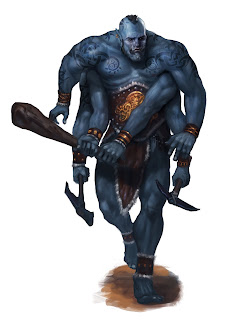 (Illustration by Nemanja Stankovic comes from the artist’s ArtStation page and is © Paizo Publishing.)

What a difference some flavor text and an art choice can make.  Gegenees are deep cuts from Greek mythology: six-armed giants from Turkey with only a small mention in the Argonautica to their names.  But those arms also recall the Martians from Burroughs’s pulp novels, and Bestiary 5’s decision to make gegenees blue recalls the multi-armed azure gods and heroes of Indian lore.  It’s just one more reminder that RPGs are the ultimate myth remix engine.

Gegenees are easy to drop into high-level adventures.  They’re somehow both novel and still classic guards for mythic sites.  Their venerable mothers may have insights into realities non-giants can’t perceive.  And gegenees sorcerer exiles might be found wandering anywhere—perhaps hunting for obscure secrets, perhaps longing for revenge against their xenophobic kin, or perhaps looking to found kingdoms of their own.

Exiled from his people, a gegenees sorcerer employs genie slaves to dominate a city.  He demands the citizens scarify themselves with symbols denoting their castes.  This in turn draws the ire of the venerable mothers who cast him out, for the patterns too closely resemble the holy patterns of their clan.

The lamia queen Ovencia has already conducted two dark rites to transform herself into a half-fiend and make her palace feed, vampire-like, on other cities.  Now she seeks to create an army that will do her bidding by sowing dragon teeth into a fertile field.  Unfortunately for her, she actually used linnorm teeth.  The gegenees warriors that sprang up from the field immediately began wreaking havoc on the surrounding lands, entirely out of the evil serpent-woman’s control.

On the outskirts of Limbo, islands float upon seas that will eventually melt into the chaotic realm’s mists of possibility.  Gegenees live upon these islands, equally suspicious of the proteans who are their neighbors and of strangers from more lawful planes who sometimes land upon their shores.

If there’s one complaint I have about the gegenees, it’s that CR 16.  It’s a giant so powerful that many parties will never face one.  I’d love to see a CR 10–12 cousin.

PS: If you’re looking for the gearsman, we covered his clanking self back here.

Last night at the radio station I was training new DJs, so I barely even remember my show happening. Let's listen to it together, shall we?  (Link good till Monday, October 3, at midnight.)

Hmmm…I wonder what (NSFW) thing I’ll be doing on Monday, October 3, at midnight?