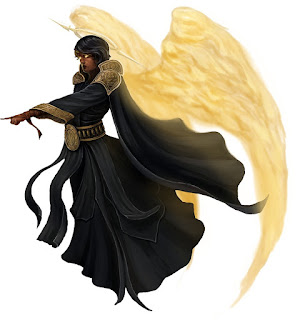 (Image by Rogier van de Beek comes from the Paizo Blog and is © Paizo Publishing.)

Balisses, also known as confessor angels, are absolutely striking: bodies wreathed in darkness, but with piercing yellow eyes and glorious wings.  Having known darkness in their own lives and deeds—and subsequently repented and reformed—they now lead others to the light through gentle guidance and open ears.

That said, don’t lay your hands on one—“[T[hey will brook no physical attacks,” says Bestiary 5.  Which means they’ll happily holy smite you and slap a mark of justice on you to remind you to be more polite in future.

Finally, keep in mind that regularly shouldering the sins of others can be a burden too great for even an angel.  Balisses may be crafted from the souls of the redeemed, but they can always fall again…

There are the laws of the gods, and then there are the laws of men…which can lead a balisse into hot water. The ruthless Ament Elfslayer has resurfaced, and a party of adventurers is deputized to retrieve him—dead or alive.  But Ament has recently sought to atone for his past under the careful stewardship of a confessor angel.  The balisse fears that if Ament is executed now his soul will still be too stained to go to the Celestial Realms.  So he brashly decides to take up arms against the adventures, even if they are of good hearts.

A reformation is sweeping the church of Eo, and among its tenets is the stricture never to treat with an otherworldly creature—even an angel.  Naturally, that sets the reformers directly against the primarch, who is well known for making his confession to none other than a balisse.  The reformation has already turned bloody, and if adventurers join the side of the Reborn Men, it is only a matter of time before they face off against the primarch and his heavenly guide.

Jagu was saved from a life of sin by a saint who showed him the error of his cruel words and deeds.  His lover who lured him into darkness, Beatrix, experienced no such epiphany and died trying to assassinate the saint.  In penance for both his and her crimes, Jagu led a life of service and after death was incarnated as a balisse.  He remembered little of his mortal life until Beatrix reappeared as Bealitrix, a succubus.  Too long in her company and Jagu fell in love and back into darkness again.  Now a corrupt angel on the path to demonhood (with special abilities such as detect good instead of evil, inflict serious wounds, etc.), Jagu does Bealitrix’s bidding in all things.